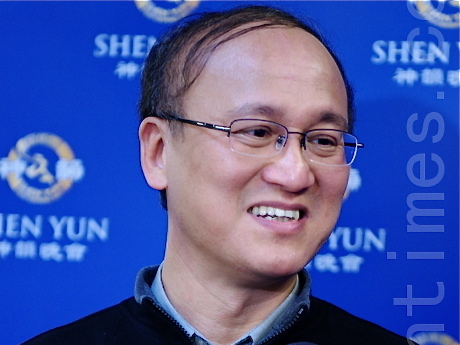 Education Department Director: Must See Shen Yun at Least Once in Our Lifetime

TAIPEI, Taiwan—Shen Yun Performing Arts has performed in Taiwan for six consecutive years. After seeing the performance in Taipei on March 24, celebrities from all walks of life were stunned by the rich connotations of the Chinese culture showcased by the world-renowned classical Chinese dance and music company.

Among the audience at the Dr. Sun Yat-sen Memorial Hall was Mr. Lin Tengjiao, director of Education Department, New Taipei City, together with his wife. Mr. Lin said, “Shen Yun’s performance is a wonderful artistic feast that we must see at least once in our lifetime.”

After the performance by the Shen Yun New York Company, Mr. Lin sat leisurely in the Hall to savor the peaceful atmosphere. He said he loved all the programs, and was particularly impressed with How the Monkey King Came to Be as it was very playful and lively. As he recalled the interesting content of the program, he could not help letting out hearty laughter.

According to the company’s website, a group of overseas Chinese artists established Shen Yun in New York in 2006 in order to restore and revive Chinese traditional culture.

Mr. Lin said: “Shen Yun is a perfect combination of overseas Chinese from the artistic community around the world. It is amazing in all aspects. In addition to the perfect combination of the Chinese and Western musical instruments that produced the wonderful music, the backdrops and artists’ seamless performance are also really great.”

He further noted that the arrangement of all the programs was very smooth, and the Chinese traditional costumes showcased were outstanding. “In particular, the synchronization of the backdrops and the artists was seamless. It was really perfect,” he said.

“The program Khata for the Gods fully demonstrated the masculine vigor of young Tibetan men. It was really great. And in the program Lotus Leaves, the lotus fans in the dancers’ hands were very vivid and lively, and the lotus pond on the backdrops fully illustrated the beauty of lotus flowers,” Mr. Lin said.

In addition, he stressed that each program was very good, and the performances by the solo vocalists were soul-stirring and impressive.

Lin Tengjiao had heard of Shen Yun last year and wanted to see the performance then, but he didn’t make it. He happily said that this time he finally got the opportunity to see it. He said he didn’t expect that Shen Yun was so popular and that the programs were so magnificent.

He added that Shen Yun’s male performers fully demonstrated masculine vigor, while the female artists showcased tenderness and grace, saying that it was indeed a beautiful artistic representation.

Mr. Lin said that after seeing Shen Yun today, his mind has calmed down, and he is looking forward to seeing the performance again next year.