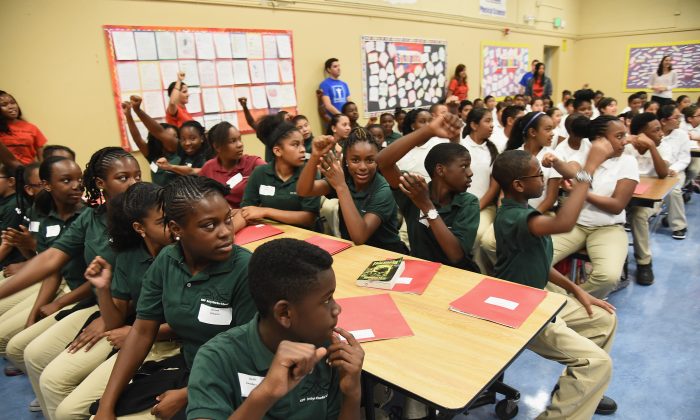 On Wednesday, July 10, the state Senate Education Committee held a public hearing on Assembly Bill 1505, which would give local districts greater authority to approve or deny petitions for charter schools. AB 1505 has already passed the state Assembly and moved on to the Senate.

Christina Laster, the education chairwoman for the Southwest Riverside branch of the NAACP, recently wrote an opinion piece for the Orange County Register, published on July 9, defending the right of her community to have access to quality public charter schools.

“We have the largest black population in California and have realized that historical practices have failed black students,” said Laster in an interview with The Epoch Times.

The Southwest Riverside, San Diego, and San Bernardino branches of the California NAACP each released separate resolutions to the civil rights organization’s state board, challenging the NAACP’s call for a moratorium on charter schools.

This move by the three branches was in stark contrast to the state organization’s education chair, Julian Vasquez Heilig, who was the architect of the moratorium. A professor at Sacramento State University, Vasquez Heilig has said the charter moratorium is the “national policy of the organization,” according to the California Political Review.

Alice Huffman, the President of the California-Hawaii NAACP informed the leaders of the three local branches that the state branch “has already taken a position of opposition and would appreciate it if you all would rescind your positions,” according to an email obtained by LA School Report.

Laster, who also chairs the non-profit educational advocacy group, Parent Union, said that over time, the leadership of the three dissenting NAACP branches realized that the slander against charters were lies and that charter schools were doing more for black students than district schools.

“While black students are testing at the level of special needs students in public schools, charter schools are raising the achievement gap,” she said. “Every single parent that I’ve talked to that supports [school] choice stated that if their charter school closes, that they are not sending their kids to district run schools where there is discrimination, bullying, and a lack of education.”

Laster also said that district schools have not been innovative or held accountable. “It’s hypocritical for there to be harsh accountability measures that make it impossible for charter schools when there aren’t the same measures for district schools.”

The leaders of the three southern California branches have not been met with support or approval by the state NAACP.

Laster explained that the suspension was overturned shortly afterwards.

She said Vasquez Heilig even accused Laster and her counterparts of being paid off by the California Charter Schools Association.

In response to this accusation, Laster said, “Heilig gets paid to do things, we work for free. I’ve never received a penny from anyone, including the NAACP. I have no ties with charter schools, I just like what they are doing.”

When asked as to whether she had any knowledge of special interest groups coordinating with the NAACP leadership to challenge the move by the three branches, Laster added, “I can’t speak to the facts about that, but in my own thought process as to why I would be accused of doing such a thing I know that typically in behavior, when people are accusatory, they are guilty themselves.”

On top of the accusations, Laster also informed The Epoch Times that at the time of the resolution being made public, other branches were intimidated. “When I came out with the resolution, all of a sudden I started getting calls by other branches. They shared stories with me that they were shaken down and threatened.”

Meanwhile, another bill addressing charter schools, AB 1507, has also passed the Assembly and moved on to the Senate. The bill would amend California law to prohibit a charter school from being located outside district boundaries when a suitable facility can’t be found.

Two other bills that would have also restricted charter schools, Senate Bill 756 and AB 1506, recently failed to pass the state legislature.

The chair of the Assembly Education Committee, Patrick O’Donnell (D-Long Beach), is also a former official of the CTA, one of the largest and most powerful teachers’ unions in California politics.