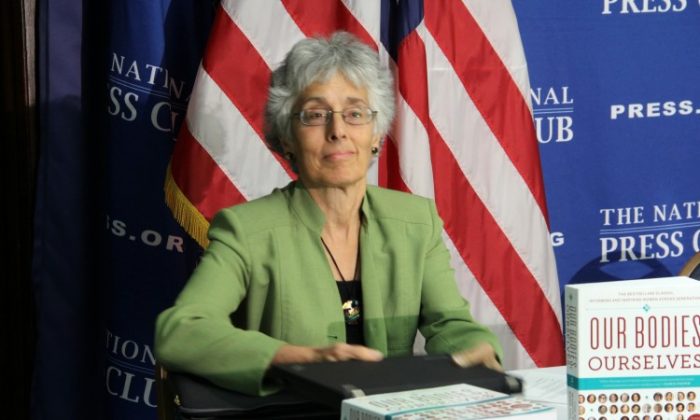 Judy Norsigian, executive director and founder of the women’s health education organization Our Bodies, Ourselves, at the National Press Center on Monday, Oct. 22. Norsigian is overseeing a campaign to distribute the book “Our Bodies, Ourselves” to every member of Congress. (Shar Adams/The Epoch Times)
US

WASHINGTON—Women in America are no shrinking violets, and yet many American women, and men, are uneducated about women’s bodies and reproductive health. This lack of education has become such a concern that a collective of women’s health professionals have commenced a campaign to educate and update members of Congress on the latest scientific findings about women’s reproductive health.

“An accurate understanding of sex and reproduction, and of how they are linked to women’s overall health, is essential for policymakers, as well as the public,” said Judy Norsigian, executive director and founder of the nonprofit women’s health education, advocacy, and consulting organization, Our Bodies, Ourselves.

Norsigian was speaking Monday at the National Press Club in Washington, D.C., to launch the campaign “Educate Congress.” The plan is to distribute copies of the book “Our Bodies, Ourselves” to every member of Congress over the next 60 days.

The initiative was conceived during a trip to Missouri to deliver the book and other educational materials to the offices of Rep. Todd Akin (R-Mo.) and Sen. Claire McCaskill (D-Mo.). The trip followed Akin’s comments about “legitimate rape” and pregnancy, according to Norsigian.

First published in Boston in 1970 as a 193-page booklet, “Our Bodies, Ourselves” is now a tome just under 1,000 pages, published by Simon & Schuster. It covers the latest scientific understanding on how women’s bodies work, sexuality, and reproductive health.

The ninth edition of the book, published in 2011, includes information on changes in the health care system and sections on safer sex, environmental health risks, and body image.

Time Magazine recognized “Our Bodies, Ourselves” last year as one of the best 100 nonfiction books published since 1923, and the Library of Congress included it as one of 88 books in its 2012 exhibition “Books that Shaped America.”

The response to “Our Bodies, Ourselves” has been profound, Norsigian told The Epoch Times. She has heard many testimonials from Congressional staff as well as the general public about the book, and one woman described how it had saved her life by alerting her to a life-threatening ectopic pregnancy, which is difficult for a physician to detect.

“You know when it’s a life threatening condition,” Norsigian said. “You have all the signs and symptoms, and you know you shouldn’t accept the ‘You should go home and all will be fine’ approach.”

Americans spend over $80 billion a year on maternity care in hospitals, more per capita than any other country in the world, “yet they have very little to show for it,” Norsigian said.

“We are still losing two women every day in the United States due to complications in pregnancy and childbirth,” Thornton told the NPC forum, adding, “Fifty percent of those deaths are preventable.”

Thornton works with supermodel Christy Turlington Burns, who co-founded the global, nonprofit organization, to raise awareness and help reduce maternal death rates after a scare with her first baby.

Turlington Burns was due to speak at the event but was unable to attend because of a sick child.

Thornton said that while different states have different issues, the inability of women to get the care they need, the lack of data to address problems, and insurance are three critical areas of concern.

The Educate Congress campaign lists a range of reproductive health policy areas that need to be addressed, including preserving access to coverage for free or low-cost birth control, improving maternity care, better reporting of maternal deaths, and better regulation of fertility clinics, especially with respect to drug safety.

Educate Congress also includes a crowd-sourced fundraising campaign, indiegogo.com/educate-congress, that enables donors to select a specific member of Congress to receive the book and add their signatures to an accompanying letter.