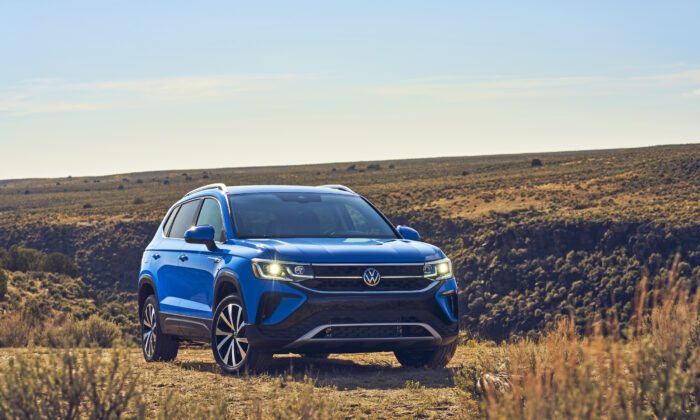 The Volkswagen Taos and Chevrolet Trailblazer are two of the latest in a growing crowd of extra-small crossover SUVs. These entry-level crossovers provide lots of utility in a relatively small package and offer many features found in larger SUVs. Cutting back on size doesn’t mean cutting back on convenience.

Chevrolet introduced the Trailblazer for 2021. It quickly stood out as Edmunds’ favorite model in the class thanks to its comfortable interior and wealth of driver aids and technology features. Now for 2022 Volkswagen has debuted its all-new Taos. It too stands out with plenty of space and features. Which of these SUVs is the better buy? Edmunds’ experts compared them to find out.

Part of what makes the Taos and Trailblazer so appealing is their relatively good fuel economy that doesn’t come at the cost of power. Both models offer efficient turbocharged engines and are available with all-wheel drive. The Volkswagen uses a 1.5-liter four-cylinder engine making 158 horsepower and 184 lb-ft of torque. It’s punchy and makes the Taos feel quick and fun.

EPA estimates for both vehicles range between 28 and 31 mpg in combined city/highway driving, depending on if all-wheel drive is equipped. These figures are average for this class. Yet in Edmunds’ real-world fuel economy testing, the Trailblazer underperformed relative to its rivals, while the Taos exceeded its EPA estimate. Given its bump in performance and fuel economy, the Taos gets the nod here.

A base 2022 Chevrolet Trailblazer starts at $22,795 with destination, a good bit less than the $24,190 for a base 2022 Volkswagen Taos. For that price, you get a similar mix of standard features such as Apple CarPlay and Android Auto smartphone integration, alloy wheels and an in-car subscription-based Wi-Fi hotspot. Higher trims offer more convenience features such as heated front seats, automatic climate control, and proximity keyless entry with push-button start.

A few aspects, however, help the Trailblazer stand out. For one, Chevy offers the Trailblazer Activ trim that comes with slightly more rugged styling and off-road capabilities. There’s nothing comparable for the Taos. Also, the Trailblazer comes standard with more advanced driver aids, including forward collision mitigation and lane keeping assist. Overall, the Trailblazer offers a little more for a little less.

The Taos has only a few more horsepower than the Trailblazer, but those German horses seem particularly strong. In Edmunds’ testing, the Taos covered 0-60 mph in 7.8 seconds, significantly quicker than the 9.4 seconds it took for the Trailblazer with its upgraded engine. That makes the Taos one of the quickest vehicles in its class, while the Trailblazer is only about average. When you have a car full of people or cargo, or need to make a quick pass of a slow-moving vehicle, that extra power makes a difference.

There’s less of a difference in day-to-day driving. The Chevrolet’s transmission shifts more smoothly, while the Volkswagen’s brakes make it easier to come to a smooth stop every time. Ride quality and overall interior comfort are very similar, and their small size makes them easy to park and maneuver. It’s close, but the Taos’ slight edge in performance sets the two apart in this category.

Again, it’s close between these two SUVs. Both models feature comfortable and spacious interiors, with more passenger and cargo space than most other SUVs in this class. The Taos takes the lead on cargo space behind the rear seats—a maximum of 27.9 cubic feet versus 25.3 cubic feet—but has a little less rear legroom than the Trailblazer. Storage for small items like phones and water bottles is a bit better in the Volkswagen.

It’s a similarly close call for either standard or available technology features. Wireless connectivity for Apple CarPlay and Android Auto smartphone integration is standard in the Trailblazer and all Taos trims except the base S. You’ll also find multiple USB ports and available wireless charging pads to connect and charge your devices. The Taos offers a digital instrument panel and an optional built-in navigation system, two features not available on the Trailblazer.

The Taos earns the head-to-head win thanks to its slight advantages in power and technology. But both of these models are among the best in the class and are excellent picks for an extra-small SUV.