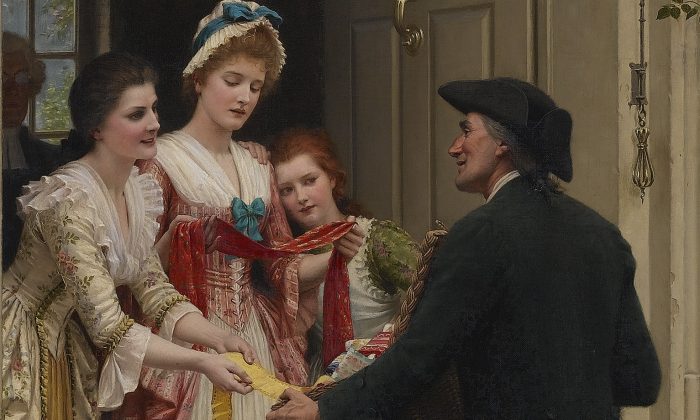 Leighton had an extensive collection of original 18th century costume pieces, instruments, and weaponry that he made good use of in his paintings. It must be said that a key element in both his medieval and 18th century costume works was a careful representation of costumes and fabrics.

It was so important to him that if he could not find an original piece that suited him, his wife would work with a seamstress in an upstairs room recreating a replica from original dress patterns. He would use the live model to sketch out the precise way the fabric hung, and then transfer it to a dummy he kept in his studio, arranging it carefully in exactly the same manner to be left undisturbed until he had finished that section of the painting.

He must have found them very beautiful and had a true passion for painting them. A particularly good example of this is “Ribbons and Laces for Very Pretty Faces,” 1904, which was a very popular work from his day.

In this work alone Leighton utilizes 19 different types of fabrics varying from lace, to silk, to embroidery, to velvet, to quilt, all painted with extreme detail, skill, and dedication.

Three woman stand at a doorway dressed in the most magnificent of gowns examining a selection of beautiful fabrics and ribbons. The brunette appears to be as taken with the seller as with the fabrics, while the youngest leans on her sister’s arm, gazing off, having lost interest in the finery she is too young to appreciate.

The viewer, whether they are a fan of Academic 19th century painting or not, has to acknowledge that this work is a veneration of beauty, not only of fabrics but of young adulthood as well.

The copyrights for this work were purchased by the Berlin Photographic Company shortly after it was painted and the image was reproduced in fine quality prints for the public consumption. In addition, “Ribbons and Laces for Very Pretty Faces” was given a full page plate in the 1913 art annual by Alfred Yockney and also illustrated in the 1904 Winsor Magazine.

Edmund Blair Leighton’s most famous works are among the most widely recognized paintings of the period. His works of “Godspeed,” 1900, and the “Accolade,” 1901, can be seen in almost every poster shop around the world and are used as the epitome of medieval iconography.

If one looks at the visual elements in “Godspeed” for example, it becomes evident that very few paintings encapsulate with such a strong a sense the sensibilities of this genre. The beautiful maiden on the steps of a stone castle, the knight in shining armor, the white steed, and the sense of immediate peril which threatens the subjects contentment almost define our modern day conception of Medieval legend and romantic sentiment.

However, he has become increasingly well known for his paintings of the beautiful and quite moments in life such as in “Ribbons and Laces for Very Pretty Faces.”