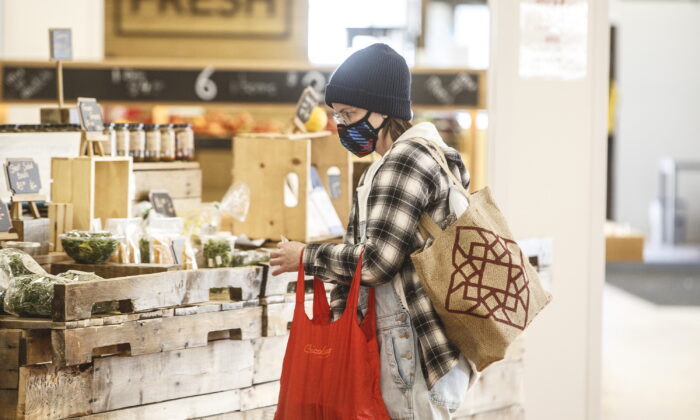 A shopper wearing a mask buys groceries at a farmers market in Edmonton on March 22, 2020. (The Canadian Press/Jason Franson)
Canada

The City of Edmonton has revoked its mandatory masking bylaw following a vote by council on March 8 to immediately end the rule.

Councillors voted 8-5 in favour of repealing the face coverings bylaw at a special council meeting after nearly four hours of debate on the subject.

Removal of the bylaw means residents in Edmonton are no longer required to wear masks in indoor public places unless they are in select locations specified by the provincial government.

“Effective immediately, masks are now only mandatory in settings as required by the Government of Alberta. These locations include public transit, AHS-operated and contracted facilities, and all continuing care settings,” the city said in a press release after the vote.

The rationale given by those who voted in favour to drop the bylaw varied. Some councillors said they wanted the city’s bylaw to align with the province or believed that the rules no longer had much value, while others said they were left with little choice with the introduction of Bill 4 by the provincial government.

Bill 4 was tabled by Alberta’s Municipal Affairs Minister Ric McIver and passed its first reading on March 8. It seeks to amend the Municipal Government Act (MGA) to prevent municipalities from enacting their own public health restrictions that “contradict public health policies and rules enacted by the province.”

As of March 1, Alberta dropped almost all of its COVID-19 restrictions, including mask mandates in most settings. Edmonton was the only municipality in the province that continued to mandate masks for its residents.

Speaking at the Legislative Assembly on March 8, McIver said Albertans and Alberta businesses should have the option of whether or not to wear masks or to require their customers to wear masks.

“For example, the proposed changes would prevent local governments from imposing mask bylaws on private-sector operators such as grocery stores and retail businesses,” he said while introducing the bill.

Bill 4 states that unless approved by the province, municipalities cannot impose their own measures that mandate residents to “to wear a face mask or other face covering” or “provide proof of vaccination against COVID-19 or proof of a negative COVID-19 test on entering a premise.”

Edmonton Mayor Amarjeet Sohi condemned the move by the provincial government during the special council meeting.

“We are treated like kids by the province. So, it’s a really sad day,” Sohi told the councillors ahead of the bylaw vote.

Asked during a press conference on March 1 about the decision to amend the MGA, Premier Jason Kenney stressed that public health is the responsibility of the provincial government, not of municipalities.

“We have shown flexibility for municipalities that at various times through COVID, brought in their own measures, and we wanted to demonstrate that flexibility,” the premier said.

Kenney indicated at a press conference on Feb. 8 that if municipalities decided to create separate COVID policies themselves, the province might intervene.

“We’ve given them considerable notice,” he said.

Councillor Anne Stevenson of Ward O-day’min supported the continuation of masking and argued that rescinding the bylaw will impact the city residents, particularly those who are most vulnerable.

“I recognize that by voting against this bylaw today, weeks or months from now, I may look back and say hey, that was a mistake, that was too conservative. I was being overly cautious, but I’d much rather err on the side of caution of protecting our community,” she said during the council meeting.

Councillor Tim Cartmell of Ward pihêsiwin has a different take. He said while he can understand that masks may protect people in very crowded places such as public transit and that he will comply, he cannot understand the continued need to impose such a mandate on other venues.

“We’ve had four waves since the first wave [came] our way. Now, one might argue that those waves would have been considerably worse if we didn’t have masks. And it’s tough to prove a negative, so I’m willing to accept that,” he said.

“At the same time, though, with the latest wave, with the Omicron wave, that virus pours through our community and I don’t know whether the masks were doing anything particularly good.”