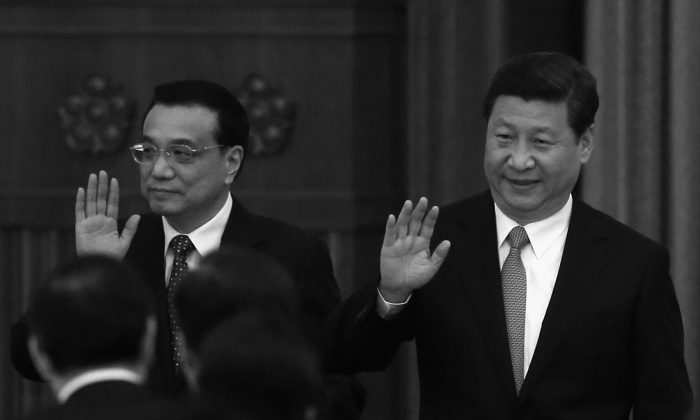 Chinese Communist Party (CCP) head Xi Jinping (Right) and Premier Li Keqiang (Left) wave to guests as they arrive for a dinner marking the 64th anniversary of the founding of the People's Republic of China at the Great Hall of the People on Sept. 30, 2013 in Beijing, China. The two were responsible for issuing a collection of reforms at the Third Plenum of the 18th Central Committee, which are meant to rescue the CCP from crisis. (Feng Li/Getty Images)
Editorials

Editorial: The Chinese Communist Party Has No Way Forward

The Chinese Communist Party’s new leadership just had its best opportunity to extricate the Party from crisis and provide a sure basis for governing China.

At the Third Plenum of the Chinese Communist Party’s 18th Central Committee, which ended on Nov. 12, Party head Xi Jinping and Premier Li Keqiang put forth a raft of new reform policies, but history will show these initiatives are too timid to meet the demands of the time.

Xi Jinping and Li Keqiang first needed to seize the power once owned by the faction of Jiang Zemin and transfer it to themselves, and then they needed to put the policy of the Chinese Communist Party (CCP) on a basis that could command consensus. They made progress on the first task, but failed in the second, indicating they are not capable of solving the fundamental problem facing the Party.

After Bo Xilai’s former right-hand man Wang Lijun fled on Feb. 6, 2012, to seek asylum at the U.S. Consulate in Chengdu, the war within the CCP between the faction loyal to former Party head Jiang Zemin and the Party’s official leadership broke out into the open.

Xi Jinping and Li Keqiang needed to eliminate the institutional basis of the power Jiang Zemin had wielded behind the scenes for the past decade. Before Jiang Zemin retired, he had changed the function of the Politburo Standing Committee from a body that advised the head of the CCP to one that had a claim to rule in its own right. In doing so, he put shackles on his successor, Hu Jintao, and Hu Jintao’s premier, Wen Jiabao.

At the Third Plenum, the Central Committee approved, unanimously of course, the establishment of a State Security Committee and a Further Reform Leading Group, to be led by Xi and Li. These new bodies officially dissolved the power Jiang had conferred on the Politburo Standing Committee.

Root of the Crisis

Among the long list of reforms published after the Third Plenum ended, one sees again and again the CCP attempting to deal with the consequences of persecuting the traditional spiritual practice of Falun Gong without addressing the persecution itself.

Jiang Zemin launched the campaign to eradicate the practice of Falun Gong on July 20, 1999, seeking to put an end to individuals doing the discipline’s meditative exercises and living according to its principles of truthfulness, compassion, and tolerance.

In a letter Jiang circulated to the Politburo on the night of April 25, 1999, he had complained that the sheer number of Falun Gong practitioners and the attractiveness of Falun Gong’s teachings to the Chinese people were a threat to the CCP.

In 1999, 100 million Chinese were practicing Falun Gong. The campaign of torture and brainwashing Jiang unleashed on these peaceful and law-abiding citizens directly affected hundreds of millions of people, when the practitioners’ family members are included.

The great harm Jiang has done—and the refusal of him or his faction to be held accountable for that harm—is the root of the CCP’s current crisis.

After Jiang Zemin started the persecution of Falun Gong, he created a legal vacuum. The efforts that had been made to bring the rule of law to China were shattered in order to remove all barriers to the campaign against Falun Gong.

Then, the CCP began using the legal methods developed for use against Falun Gong against the public at large, creating widespread anger and turmoil.

The key to Jiang’s remaking of the legal system was the role played by the Political and Legal Affairs Committee (PLAC), which drove forward the persecution of Falun Gong while holding authority over all parts of the legal system.

Xi Jinping has already taken several steps to rein in the power of the PLAC. The new reforms continue the effort to weaken the PLAC by severing its tie to local courts and procuratorates—the offices responsible for investigating and prosecuting crimes. These institutions will now be directly governed by the central Party leadership while the Supreme Court will be in charge of their funding and personnel.

In order to help fund the persecution of Falun Gong, Jiang Zemin put control of lucrative state-owned enterprises in the hands of cronies. Xi Jinping and Li Keqiang will now look to wrest control out of their hands.

Recently, Jiang Jiemin, the former president of the giant China National Petroleum Corporation (CNPC) and confidant of Zhou Yongkang, a key player in the Jiang Zemin faction, was removed from his post. The CNPC is said to have been divided into three companies.

Unrestrained by the central authorities, local governments began to realize enormous profits by seizing land with violence. This has helped create a real estate bubble and at the same time ignited civil protests all across China. This situation has forced Xi Jinping and Li Keqiang to draft reforms putting restrictions on the local governments, especially on their finances.

When Deng Xiaoping presented his reforms to the Third Plenum of the 11th Central Committee in 1978, he started by redressing the victims of the Cultural Revolution and correcting miscarriages of justice. With these limited moral resources, Deng was able to push his reforms forward and ensure the CCP could reign for the past 35 years.

A key reform requires consensus within the group. To implement it, one needs moral authority and the trust of the people. Today’s CCP falls short on these points.

The CCP’s ideology of Marxism is bankrupt, and communism has become a joke. Yet there is no other belief tying the CCP together. The officials and Party members focus on nothing but corruption and promotion. The Party has tons of factions and no consensus.

In particular, Jiang Zemin’s faction, haunted by the fear of being held accountable for the persecution of Falun Gong, is doing everything it can to hinder Xi Jinping and Li Keqiang from enacting reform. Behind the scenes, Jiang’s faction and Xi are struggling bitterly for power, and Jiang’s fingerprints are on a number of incidents that have embarrassed or distracted Xi Jinping.

The one resource left to the CCP to gain popular support is to appeal to patriotism—the kind of patriotism based on inciting hatred. Loving China means hating the United States or Japan. Building up such patriotism means tearing down relations with other countries. In an age of globalization, such a strategy will inevitably recoil back on China.

At the same time, for today’s CCP officials to appeal to patriotism is a farce. Many representatives of the Chinese regime’s national legislature and elite advisory body—the National People’s Congress and the Chinese People’s Political Consultative Conference—hold dual citizenship. China’s wealthy have been emigrating, and top officials have sent their wives, children, and money overseas, while themselves keeping a foreign passport. In this situation, the appeal to patriotism is worse than meaningless.

The CCP has ruled for over 60 years. It has killed 80 million Chinese and persecuted hundreds of millions. The persecution of tens of millions of Falun Gong practitioners is still ongoing. The “two will-nots” abandons the idea of exposing and criticizing Jiang Zemins’s evil crimes.

By again asserting the policy of “two will-nots,” Xi Jinping and Li Keqiang have deprived themselves of the opportunity to place the transfer of power on a moral basis. Any reform without a moral foundation is bound to fail.

The Third Plenum of the 18th Central Committee will inadvertently become a turning point in history. In an attempt to solve the problem of faction in the Party, the Party’s leaders have abandoned the possibility of exposing and criticizing the evil the CCP has done.

In denying the fundamental problems the Party faces, the way forward for the Party becomes so narrow as to be a dead end. The political situation will have to take a new turn.

The consequences will surface soon. The reforms just launched will soon run aground, and conflicts will begin to swirl around them. The factions in the CCP, along with the central and local governments, will fall into chaotic battles. Chinese society will disintegrate, and the CCP will begin to dissolve. When the superficial reforms fail, the real social reforms will begin.