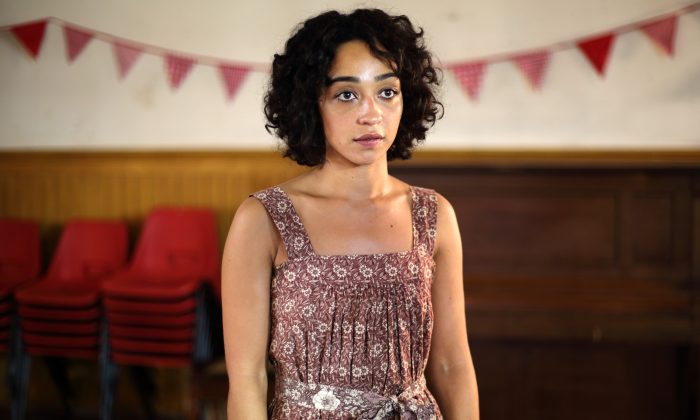 “Iona, Iona, where do I go from here?” is the question that haunts the central character at the end of this film. Indeed, with the first quarter scant in dialogue, it actually drives much of the story.

Iona (Ruth Negga) is on the run. She has escaped an abusive relationship and, through a tragic twist of fate, finds herself protecting her 15-year-old son Bull (newcomer Ben Gallagher) from the law. What will she do now that Bull has killed her violent policeman husband, caught in the act of raping her?

Bundling the corpse and few possessions into her car they escape Glasgow and head for the land of her upbringing and the Christian community she abandoned on the Scottish island she was named after, Iona.

Director and writer Scott Graham enhances the stunned contemplative silence with long pensive scenes of rolling countryside, waves washing off the side of the ferry, and the car burning (along with the evidence inside).

Ruth Negga gives a nuanced and brooding performance. It is very different from her role in Marvel’s Agents of Shield, yet the character is similarly compelling as a woman whose ulterior motives have yet to be revealed.

The questions continue on the island of Iona. Who is this Daniel (Douglas Henshall) who takes in the fugitives without any reservation? And why did Iona leave this loving and caring community?

Scenes of island life and congregations giving thanks for God’s blessings enhance a feeling of peaceful contemplation, in stark contrast to the dilemma Iona and Bull find themselves in.

Iona has rejected her faith while Bull yearns for forgiveness for his crime and is curious about the meaning of prayer.

A childhood accident has left her crippled, but her father still carries her around on his back – even though she is now 14.

Her parents pray that the nerve damage she suffered will heal and they garner strength from their faith.

As another twist of fate has it, Sarah finds herself abandoned in a barn and having to stand on her own two feet.

This ray of hope comes amid an otherwise tragic string of events, as the police close in. Bull finds himself running for his life to a heartbreaking conclusion in this contemplative and brooding drama.