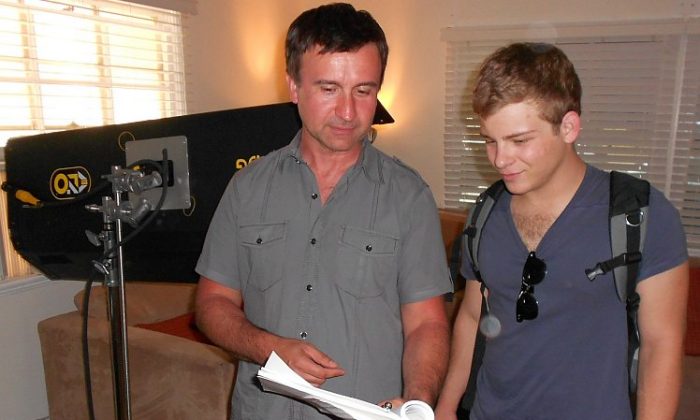 LOS ANGELES—Luciano Saber’s new movie, “Edge of Salvation,” is a thought-provoking film focused on the choices life brings us. It highlights life changes and how we change as people because of them.

The movie “examines human behavior in times of adversity and it’s meant to stimulate further conversation about the economic condition of your nation,” says Saber.

“It’s the ultimate definition of character—the choices ordinary people make when faced with extraordinary situations. However, faith and hope is the lesson here,” he adds.

In the film, a documentary crew follows the lives of several unlikely characters who, due to unforeseen circumstances, have to move from the luxury of a multi-million dollar home to a tough inner-city neighborhood.

Sarah Malone (Charlene Tilton from the original cast of “Dallas”) finds herself at a moment of financial, personal, and familial crisis: her daughter admits that she’s pregnant; her husband’s body is discovered (an apparent suicide); and her adopted son goes on the trail of the gunman who shot down his biological parents.

Diversity a Way of Life

An award-winning writer and producer, Saber is no stranger to change. He has an unusual and surprising background—he was a covert operative in the U.S. military.

Saber says he “was always fascinated by Hollywood and the television shows of the mid-eighties.”

He grew up watching “Miami Vice,” “Hill Street Blues,” “Magnum P.I.,” “Hart to Hart,” and of course “Dallas.” Theater seemed a natural next step; he joined a community theater in Chicago, and in his early teens he signed with an agent.

After graduating high school, he joined the U.S. military. “While I was in the military, I was recruited into a covert agency dealing with various criminal underground investigations and my acting training came in handy,” he says.

After the military, Saber served as a police officer in Chicago and then took a job as an on-camera reporter for a nationally syndicated TV station WCFC-TV38 (currently TLN), which led him back into the media arts.

Assembling a cast is perhaps one of the vital components to bringing a screenplay to life. Just the right chemistry is a potent alchemical blend that can ensure the success of a movie—or its demise.

Saber, however, has brought together a trio of very talented people in the “Edge of Salvation,” one being Tilton, who has been spending the time since “Dallas” doing theater in the United States and abroad.

Her character, Sarah Malone, finds her life devastated after her husband misappropriates funds and disappears. What really drew her to the part was that Sarah had to “call on her faith in God to get through the tough times and to help hold her family together,” she says.

Tilton has returned to a new and rebooted season of “Dallas,” which premiered this summer. Fans from the 1980s were eager to revisit the former series. Bringing back the original Ewing family characters, Larry Hagman, Tilton, Patrick Duffy, and Linda Gray, brought extra excitement to the “Dallas” remake.

The second actor, Jonathan Lipnicki, who plays JJ, got his start as a five-year-old playing Renee Zellweger’s son in the Oscar-winning film “Jerry Maguire.” He not only received global acclaim but also held his own with Tom Cruise, Cuba Gooding, and Renee Zellweger.

The young Lipnicki had already been bitten by the acting bug after watching his older sister attend acting class, and he remembered thinking, “I want to go there.”

“I think once I got the experience of working with Tom, Cuba, and Renee, that is what solidified those [acting] ambitions for me,” he says.

Lipnicki has a philosophy about and a passion for philanthropy: “That is how I was raised—the most important things you can do are for other people. I have been very lucky to be in a position where I am able to affect change in people’s lives, and I feel it would be selfish of me to waste that opportunity by not helping.”

Among his philanthropic speaking engagements are Juvenile Diabetes Research Foundation, Starlight Children’s Foundation, and NBA’s Read to Achieve. He is also involved with animal rights groups, including Pets & Their Stars and Nuts for Mutts.

Jeremy London, who plays the documentary maker in “Salvation,” rounds out the cast. London has appeared regularly in “Party of Five,” “7th Heaven,” and “I’ll Fly Away.”

“Edge of Salvation” is slated for foreign distribution for television and DVD. In the United States it will be submitted to multiple film festivals.