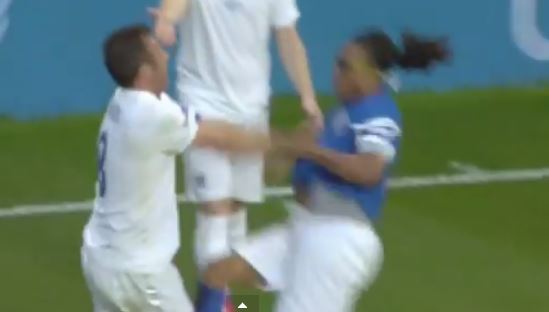 Edgar Davids and Jonathan Wilkes got in a row at Soccer Aid 2014, leading to Davids appearing to hit Wilkes.

Wilkes, the former player for Ajax, AC Milan, and Juventus, was tackled by Davids as he tried to get past him.

The rough tackle seemed to anger Wilkes, who rose to his feet and raced toward Davids. But Davids, the one-time Barnet manager, didn’t back down and appeared to strike Wilkes.

Teammates rushed over and intervened before the scuffle could get any more intense, but not before Wilkes pointed at Davids and jawed away.

Davids was booked for the tackle but his side won the match 4-2.

Soccer Aid, organized by former Take That singer Robbie Williams, raised £4.2 million for Unicef, according to the Daily Mirror.

The match also included a lighter moment when Rest of the World manager Jose Mourinho went onto the field to take down popstar Olly Murs.

Both appeared to take the tackle in good humor and no blows were exchanged.