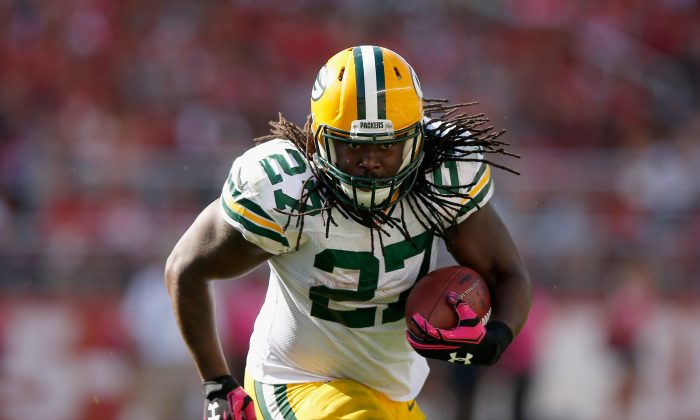 Green Bay's Eddie Lacy made the Pro Bowl in 2013 but hasn't been selected since. (Ezra Shaw/Getty Images)
NFL

Eddie Lacy looks serious about losing weight this offseason. Actually, he looks like he already lost it.

A photo posted to Facebook, which has been taken down, showed Lacy looking thinner after a workout with P90X trainer Tony Horton, multiple outlets reported Wednesday.

Pablo Sandoval needs to check this out. https://t.co/r5FQwTuAdP #RedSox #Packers

The Green Bay Packers running back, who’s battled weight issues since entering the league three years ago was looking pretty chunky this past season—and his stats show it (as if the pictures don’t).

The former Alabama star set career-lows in rushing yards (758), attempts (187), yards per carry (4.1), receiving yards (188), and rushing TDs (3) this past season and was reportedly told by coach Mike McCarthy to slim down this offseason. Mission accomplished.

Eddie Lacy is turning to P90x to help with the weight issue: https://t.co/pFMle4Jiqf pic.twitter.com/8H4VqyIoRc

“Eddie’s got a lot of work to do,” McCarthy said. “I’m stating the obvious. His offseason last year was not what it should be and he never recovered from it. He cannot play at the weight he did this year.”

Before & After Pics of Eddie Lacy Since Starting P90X https://t.co/THvmqiT07T pic.twitter.com/aotPfftGG4

Lacy, a Pro Bowler in 2013, ran for better than 1,000 yards in each of his first two seasons in the league. The 5-foot-11 back, who was listed at 231 pounds going into the season, was Green Bay’s second-round pick (61st overall) in 2013 after spending three years with the Crimson Tide.

Green Bay actually traded down from the 55th pick with San Francisco in a draft-day trade and acquired a sixth-rounder to go along with the 49ers’ second-rounder, which they used to select Lacy.

He was immediately thrust into a starting role and thrived, winning AP Offensive Rookie of the Year in 2013 after finishing eighth in the NFL in rushing yards with 1,178, and third in rushing TDs with 11. The next year his 1,139 rushing yards were seventh in the league, while his 1,566 yards from scrimmage placed him ninth overall.

But this past season Lacy had four different games where he carried the ball five times or fewer after having just one his first two years. Should he keep his weight off for the rest of this offseason he would be a popular pick for a bounce-back season.