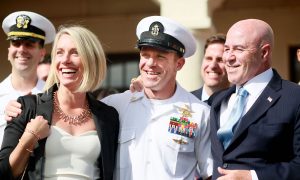 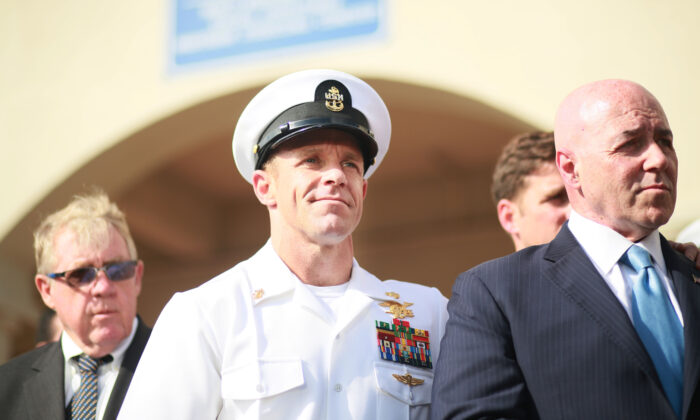 Navy SEAL Eddie Gallagher praised President Donald Trump for championing his case after the Pentagon announced that Secretary of the Navy Richard Spencer was leaving his post under pressure from Secretary of Defense Mark Esper.

Esper accused Spencer of trying to make a private deal with the White House that would allow Gallagher to retire with his SEAL Trident pin.

The ouster was preceded by the Navy announcing publicly that it might take Gallagher’s Trident, which designates him as a member of the special operations unit, prompting Trump to issue a statement on Twitter saying the insignia wouldn’t be taken.

Gallagher, who was acquitted of stabbing an ISIS prisoner in U.S. custody and firing on Iraqi civilians while being found guilty of posing with the prisoner’s corpse for photos in 2017, was scheduled to go before a review board in December to determine if he would keep the pin.

After Spencer’s exit was announced, Trump wrote on Twitter: “Eddie will retire peacefully with all of the honors that he has earned, including his Trident Pin.”

Gallagher, whose demotion from chief petty officer to petty officer 1st class in the matter was reversed by Trump, said in a statement following the ouster that Trump is a “true leader.”

“President Donald Trump, you have my deepest gratitude and thanks. You stepped in numerous times and showed true moral fiber by correcting all the wrongs that were being done to me,” Gallagher said in the statement obtained by the Washington Examiner.

“You are a true leader and exactly what the military and this nation needs. God bless you and your family.”

Tim Parlatore, Gallagher’s lawyer, said that his client expects to retire by Nov. 30 with his Trident.

Esper said in a statement that the proceedings against Gallagher are over.

“Secretary Esper’s position with regard to UCMJ, disciplinary, and fitness for duty actions has always been that the process should be allowed to play itself out objectively and deliberately, in fairness to all parties,” the Department of Defense said in a statement. “However, at this point, given the events of the last few days, Secretary Esper has directed that Gallagher retain his Trident pin.”

Esper said that he was “deeply troubled” that Spencer allegedly displayed a “lack of candor” regarding his conversations with the White House over the handling of Gallagher’s case.

“After Secretary Esper and Chairman Milley spoke with the Commander in Chief on Friday regarding the case of Gallagher, Secretary Esper learned that Secretary Spencer had previously and privately proposed to the White House—contrary to Spencer’s public position—to restore Gallagher’s rank and allow him to retire with his Trident pin,” the department stated.

Spencer said in a letter to Trump that he was honored to serve, but that “unfortunately it has became apparent that … I no longer share the same understanding with the Commander in chief who appointed me.”