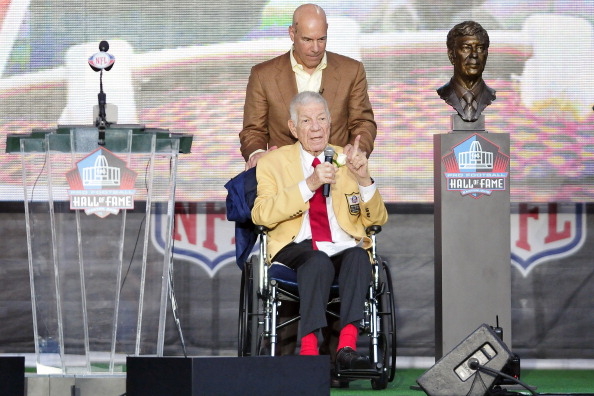 Ed Sabol, the head of NFL Films, has died, according to reports on Monday.

Sabol passed away at his home in Scottsdale, Arizona.

NFL.com confirmed his death on Monday evening. The article reads:

A member of the Pro Football Hall of Fame’s Class of 2011, his vision led NFL Films in revolutionizing the way sports are presented. During his tenure (1964-1995), NFL Films won 52 Emmy Awards.

Many innovations were introduced under Sabol: the first use of a microphone on coaches, referees and players, adding popular music to footage, and of course, bloopers videos.

The Ohio State University alumnus served as the president of NFL Films until 1985. He turned over the role to his son Steve, who died in 2012 at the age of 69.

After word of his death spread on social media, users expressed their condolences.

Ed Sabol, the founder of @NFLFilms, has passed away and joined his son in football heaven. #RIPEdSabol pic.twitter.com/7Szc2vNr7q

We are saddened to hear about the passing of @NFLFilms founder, Ed Sabol. Our thoughts are with his family.

Ed Sabol, one of the greatest contributors to the NFL and filmmaking as a whole, has died. Rest in peace, Ed.

Amazing legacy Ed Sabol leaves behind. No way the NFL or football would be quite as popular if not for him, his son & NFL Films.