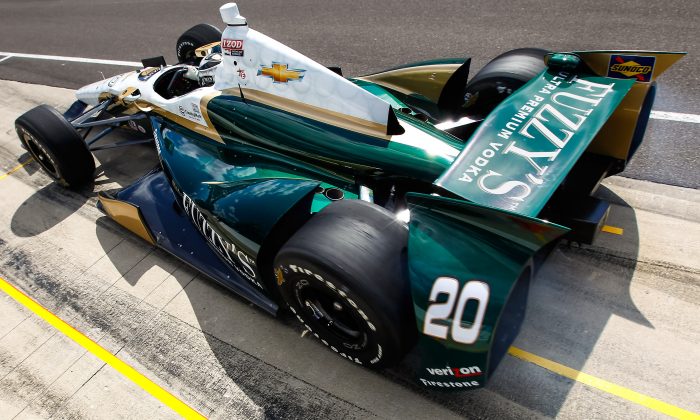 Scott Carpenter put his #20 Fuzzy’s Vodka Dallara-Chevrolet on the pole for the Indianapolis 500 Saturday evening, beating the biggest teams in the paddock.

Carpenter is an Indiana native, which earned him the affection of the Indianapolis crowd before he started. That affection increased when he made it into the Fast Nine, and when his time survived the assaults to remain fastest, the crowd noise was deafening.

“I knew we had a shot,” Carpenter told NBCSN over the roar of the crowd. “I felt coming in we had a chance to be on the pole or outside the top ten—this field is unbelievable.

“To be on the pole for this race is a really big start of a dream come true and I hope it is the start of what’s been a great month of May.

“The Fuzzy’s Vodka car’s been great; I really can’t thank my team enough—all those guys put in so much work on this car. I’m proud of them. But this is just the first part of what we want to do.”

Carpenter, who is the only owner-driver in the field, turned a lap at 228.762 mph, four-tenths of an mph quicker than the best efforts of the multi-car Penske and Andretti teams.

“To be a single-car team in this Chevy shootout [all the Fast Nine cars were Chevy powered] fighting with the Penske and Andretti guys, that’s an accomplishment in and of itself. For this team to do the hard work to give me what I needed to go out and put it on the pole is great. I think a whole lot of prayers helped too.”

The most surprising result of the session was the time turned in by Andretti Autosports rookie Muñoz. The 21-year-old had never driven an IndyCar before his first practice sessions at Indianapolis, yet he managed to lap the 2.5-mile track at 228.342 mph, putting him second on the grid.

“Awesome run again,” Muñoz told MSNBC. “We changed some things for this run, the car was again really good.

“I have to give a big ‘Thank You’ to my team, Andretti Autosports and to all my mechanics, my driver coach—front row means a lot, you know. At just 21 years old to be front row with these guys is unbelievable.

Despite his amazing achievement, the level-headed rookie was already looking ahead. “The most important now is the race, so hopefully tomorrow we can focus on that but so far I am really happy and I hope to close this month really good.”

Penske drivers A.J. Allmendinger and Will Power will take the middle and outside of Row Two. Power was the quickest driver in the regular qualifying session, but couldn’t repeat that performance in the Fast Nine shootout.

Power’s crew, looking for just a little more speed, took a bit too much downforce of the car. Power was fastest of all through the speed traps, the only driver hitting 236 mph, but he couldn’t maintain it though the corners.

Power drove right to the limit, almost brushing the wall exiting Turn Two on his second lap and Turn One on his third.

The first 24 positions for the 2013 Indianapolis 500 are set. The remaining drivers will fight for the remaining grid positions Sunday. Tune in to the NBC Sports Network to watch, and follow live timing and scoring on IndyCar.com.