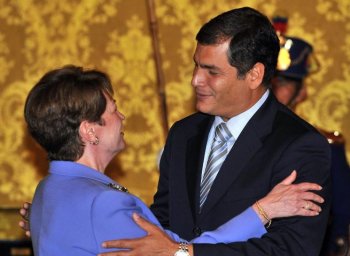 By David Sabatini
Print
The Ecuadorian government urged U.S. Ambassador to Ecuador Heather Hodges to leave the country in the shortest possible time on Tuesday.

The scandal over the U.S. diplomat is over diplomatic cables from her to Washington were exposed by WikiLeaks. In the offending reports, Hodges accused Ecuador's newly retired police chief of corruption, and alleged that President Rafael Correa had known about the acts.

On Tuesday morning, Hodges was declared “persona non grata” by Ecuador, which in diplomatic terms means she is stripped of her diplomatic status and isn’t welcome in the country anymore. This announcement was made by Ecuadoran Foreign Minister Ricardo Patino at a news conference.

According to Patino’s statement this decision, however, does not “imply a rupture of relations” with the United States and that Ecuador hopes for normal relations when the Untied States appoints a new ambassador.

Wikileaks has caused diplomatic frictions for the United States around the world by revealing piecemeal diplomatic cables from U.S. diplomats to Washington.

Last month, the U.S ambassador to Mexico resigned following mounting pressure over cables he sent to Washington about the Mexican government’s lack of cooperation in battling drug cartels.

While Hodges was expelled for the corruption comment, other cables from her desk to D.C. reveal growing tensions between the two countries.

In a sub-section called of a report from Jan. 14, 2009, Hodges referred to President Correa using the United States as “his regular whipping boy.” The entire thrust of the communication is about how Correa had been lurching strongly to the left in recent months.

Correra has recently visited Iran, then Cuba, where he “demanded that the ‘Empire’ end its blockade (sic) of Cuba.”

“We are conveying the message in private that Correa's actions will have consequences for his relationship with the new Obama administration, while avoiding public comments that would be counterproductive,” wrote Hodges.

Hodges was appointed ambassador to Quito in July 2008. She previously served as U.S. ambassador to Moldova from 2003 to May 2006. Hodges has worked with the Ecuadorian government to stop the flow of drugs, weapons, ammunition, fake currency, and illegal substances into the United States through Ecuador.