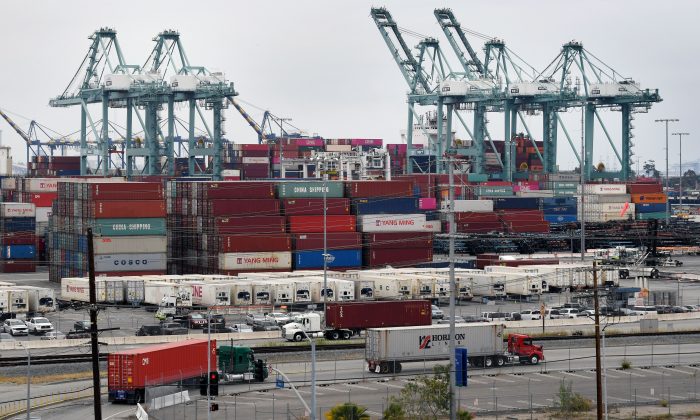 Shipping containers from China and Asia are unloaded at the Port of Los Angeles in Long Beach, Calif., on May 14, 2019. (Mark Ralston/AFP/Getty Images)
Trump Administration

U.S. economic growth decelerated in the second quarter as a decline in net exports and in the buildup of inventories weighed substantially on growth. The economic expansion, however, was still better than expected, pushing markets to record highs on July 26.

The gross domestic product (GDP) growth slowed in the second quarter to a 2.1 percent annual rate from 3.1 percent in the first quarter mostly due to a drop in exports and non-farm private inventories, according to data released on July 26 by the Bureau of Economic Analysis.

Strong earnings announcements from technology companies such as Alphabet and Intel also buoyed the rally.

The most important boost to GDP came from consumers, with personal consumption expenditures rising 4.3 percent.

“We expect that consumption will continue to be the main driver of around-potential growth this year, with a solid labor market supporting incomes and thus spending,” Veronica Clark, Citi analyst, wrote in a report.

“Still-subdued inflation supports our view for a 25 basis-point cut,” from the Federal Reserve this week, she added.

Exports largely contracted due to America’s trade battle with China, where the Trump administration imposed import tariffs, prompting a retaliation. Exports to the Middle Kingdom are down by more than $10 billion so far this year, compared to the same period (January–May) a year ago.

The effect on China has been even greater, as the United States imported some $25 billion less from China this year.

Another drag on GDP was private inventory investment. After a buildup in inventories in the first quarter—partly stemming from the weakening exports—the second quarter drop was to be expected.

Slowdowns in inventories and net exports together accounted for a 1.5 percentage point drag on GDP.

“The Trump economy is growing strong and, on the heels of 3.1 percent growth in the first quarter, is poised to continue expanding,” Commerce Secretary Wilbur Ross said in a July 26 release. “President Trump’s ambitious agenda of deregulation, tax reform, and job creation is making the U.S. the premier place for business, and is restoring our position as an economic leader on the world stage.”

President Donald Trump said in a July 26 tweet that the GDP growth was “not bad considering we have the very heavy weight of the Federal Reserve anchor wrapped around our neck.”

Q2 GDP Up 2.1% Not bad considering we have the very heavy weight of the Federal Reserve anchor wrapped around our neck. Almost no inflation. USA is set to Zoom!

Trump has blamed the Federal Reserve’s series of interest-rate increases last year for slowing the economy, saying there’s “almost no inflation” and “USA is set to Zoom!” presumably under the condition that the central bank cuts the rates.

The Fed is indeed expected to do so at its end-of-July meeting, and the stock market is giddy with the anticipation of cheaper cash.

Ross pointed to the surge in consumer spending, stating that spending on goods rose at the fastest rate since the first quarter of 2006.

“The Trump Administration’s policies have delivered repeated wins for American workers. In July, the current economic expansion became the largest in U.S. history—a testament to the strength of President Trump’s business-friendly policies,” he said.

Trump tax and regulation cuts have boosted the economic expansion, which has beaten economists’ expectations in multiple regards, especially in the job market.

After an underwhelming 70,000 jobs added in May, payrolls expanded by 224,000 jobs in June, handily beating expectations.

The unemployment rate has remained under 4 percent for 13 out of the 15 past months, standing at 3.8 percent in June.

Amid concerns over skilled labor shortages, the administration obtained pledges from hundreds of companies to provide apprenticeships and job training to 10 million Americans.

Meanwhile, Americans’ dependency on the government has diminished, most visibly in the decline of more than 6 million in food stamp enrollment over the past roughly two years.

“The tight labor market benefited American workers,” Ross said, pointing to the nominal average wage growth of 3 percent or more in each of the 11 months ending June.