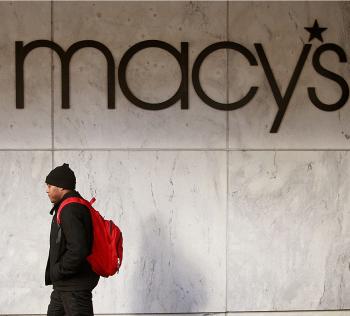 Macy's Inc. announced that it will cut nearly 4 percent of its workforce, 7,000 jobs, and cut owners dividends by 8.25 cents to 5 cents. (Scott Olson/Getty Images)
Business & Markets

The U.S. Department of Commerce said on Monday that U.S. consumer spending fell for a record sixth consecutive month in December. Massive job losses, declines across the financial markets, and decreases in home values shook consumer confidence even as businesses have reduced prices on goods and services.

Perhaps more intriguing is that decreased spending pushed the savings rate up to 3.6 percent in December. It is still a meager rate, but much higher than in recent years when a booming economy, skyrocketing home values, and cheap credit drove Americans to spend more than they earned.

More economic statistics on Monday suggest that the current recession—which is already the deepest in a quarter of a century—may not let up any time soon.

Institute for Supply Management’s January factory index fell to 35.6 in January as cutbacks on spending led to excess inventory at businesses across the country, which affected manufacturing orders. Consumer spending is often closely tied to business orders, and a factory index reading below 50 signifies an economic contraction.

The grim economic data has underscored the necessity of President Obama’s stimulus plan. One version consisting of $819 billion of tax cuts and spending recently passed the House, and another version is up for debate this week in the Senate. President Obama has urged lawmakers to set aside their differences for a quick passage of the bill.

Department store chain Macy’s Inc. said on Monday that it would eliminate about 7,000 jobs—5,100 within its stores—and consolidate its regional headquarters. Nearly 40 percent of all management positions were affects, including 850 in Atlanta, 600 in Miami, and 1,400 in its San Francisco regional headquarters. The company employs 180,000 employees in total.

The Cincinnati-based retailer is the second-largest department store chain in the United States. Macy’s operates its namesake stores across the country as well as the high-end Bloomingdale’s chain.

"Reducing our workforce is an unfortunate outcome of the current economic environment, and I am frustrated that so many of our people will be unable to move forward with us …" CEO Terry Lundgren said in a statement.

"In addition, and especially in the current challenging economy, we must operate in a responsible manner that allows us to maximize the value we offer to our customers and enhance our profitability,” he continued.

The payroll cuts and other expenses announced this week should save about $400 million per year beginning next year, the company said.

The company “is assuming a very challenging environment through the remainder of fiscal 2009,” a read a Macy’s statement regarding its 2009 economic guidance. The retailer echoed recent federal economic reports regarding consumer spending patterns, and is taking actions to reduce inventory and expenses.

A memo leaked on Monday from a United Auto Workers union executive showed that Chrysler LLC is prepared to offer up to $50,000 to almost all of its U.S. hourly workers, in its latest attempt to slash costs.

In addition to $50,000 in cash, Chrysler reportedly is offering another $25,000 in the form of a voucher for the purchase of a new Chrysler vehicle.

The memo, from UAW vice president General Holiefield to union workers, was posted on a UAW web site on Monday. Chrysler’s offer provides financial incentives for voluntary retirement for employees nervous about their futures.