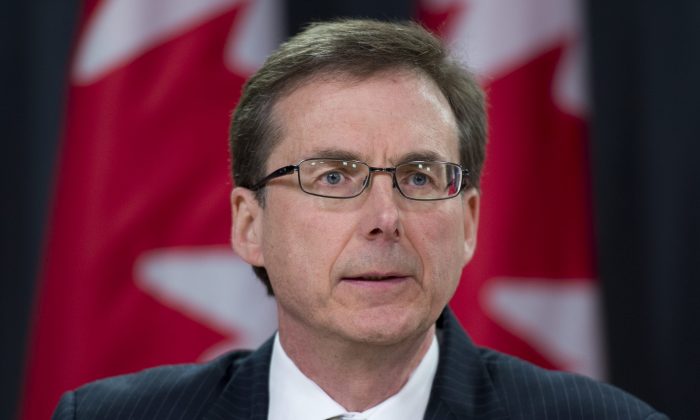 The Bank of Canada had forecast third quarter GDP growth of 3.8 percent in its July monetary policy report. On Oct. 1, 2013, senior deputy governor Tiff Macklem revised it lower to 2.0 to 2.5 percent, a figure in line with the forecast of many Bay Street firms. (The Canadian Press/Adrian Wyld)
Canada

OTTAWA—The Bank of Canada has lowered its forecasts for economic growth in the second half of 2013 and possibly for next year, citing a more prudent consumer and an export sector that has yet to fully recover.

Senior deputy governor Tiff Macklem said Tuesday, Oct. 1, that the central bank no longer expects the July–September period to grow at a rate of 3.8 percent as previously forecasted.

Instead, the bank said the third quarter will likely show an economy that advanced at a more moderate pace of 2.0 percent to 2.5 percent, the same speed it now expects will continue in Q4. Previously, it had penciled in a 2.5 percent expansion for the last three months of the year.

The new projections were unveiled in an advance copy of a speech delivered by Macklem to a business audience in Toronto.

It was an unusual occurrence for the central bank, which normally issues new forecasts during its quarterly monetary policy reports. The next report will be issued Oct. 23.

A Statistics Canada report Monday on the gross domestic product found that the economy advanced by 0.6 percent in July, a good monthly number but less than would be necessary to jump-start the quarter to a near 4 percent surge.

In the speech, Macklem said Canadians had become more cautious about spending, a welcome development given that debt-to-income levels are already at record highs.

“This is good news,” Macklem said. “But this new-found and welcome household prudence is dampening growth. To replace this growth, we need a rotation in demand toward exports and business investment.”

“Unfortunately, this rotation has proven elusive.”

In Macklem’s speech, the assessment was of an economy struggling to achieve liftoff, with a growth rate below the 2.5 percent needed to return to full capacity.

However, Macklem said the central bank still believes a revival in the U.S. economy will eventually lead to an increase in demand for Canadian products, but due to competitive pressures and continuing weak demand, it is taking longer than expected.

The delay has also restrained businesses from stepping up investments, a vicious negative cycle that is keeping the economy from returning to its potential.

Although Macklem did not specifically refer to 2014, the analysis suggests that the bank may also be preparing to revise downward next year’s 2.7 growth estimate, which many economists already consider overly rosy.

Uncertainties in the U.S.

Macklem made no mention of the U.S. government shutdown and pending debt limit deadline, which economists say could sap as much as 1.5 percent from U.S. growth if the crises persist. Such a scenario could also rebound on Canada, particularly in the key export sector.

Capital Economics has calculated the immediate hit to Canada would be in the range of three-tenths of 1 percent, but that the consequences would be more severe if the impasse lasts and if Congress refuses to pass legislation to raise the U.S. debt limit by Oct. 17, causing a technical debt default.

“This is a reminder that while Canada’s economy remains strong, we are still vulnerable to uncertainties outside of our borders, especially in the U.S. and Europe.”