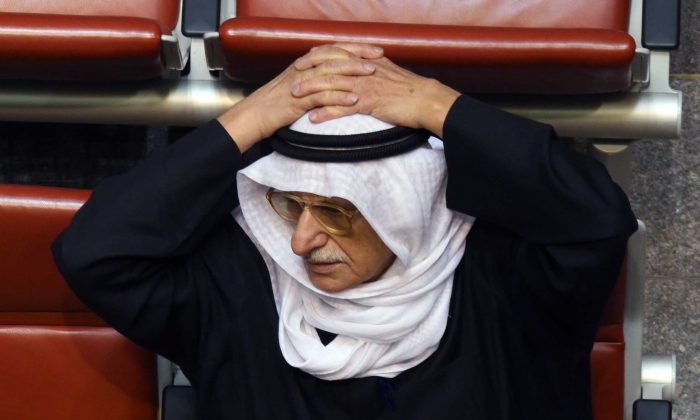 A Kuwaiti trader follows the market's movement at the Stock Exchange in Kuwait City on Dec. 18, 2014. (Yasser al-Zayyat/AFP/Getty Images)
Opinion

The U.S. economy can handle higher interest rates, and the Federal Reserve’s policymaking committee has signaled such a move is likely by summer.

The Fed has kept short-term borrowing rates near zero since December 2008 to support recovery from the financial crisis. However, the economy is picking up steam—GDP growth should be in the range of 3 percent in 2015, up from 2.3 this year.

Households have worked down much of their debt, and home and stock prices have risen. Consequently, consumers are in a stronger position than at any time since the days before the financial crisis and are using credit cards again. Auto sales remain strong.

Business spending on new facilities, computers, and software should continue advancing at a healthy 6 percent pace through next year.

The $64,000 question remains: Will conditions abroad pull down the U.S. economy?

The eurozone is teetering on recession and the Japanese economy is contracting, but chronically slow growth and recession in those places are hardly new. U.S. businesses adjusted their export expectations and investment strategies long before those conditions hit the headlines and rattled the stock market.

In China, growth slowing from about 8 percent to 7 percent is hardly cataclysmic. The real U.S. problems with the Middle Kingdom are its artificial barriers to U.S. exports and subsidized sales of manufacturers into U.S. markets. China is using protectionism to move up the technological ladder to challenge American leadership in areas such as computer networking and nuclear energy.

Lower oil prices add more dollars to consumers’ wallets than subtract from U.S. petroleum producers’ profits. If oil were to stay below $65 a barrel, investments in new oil-producing capacity would be curtailed, but that could be mitigated by lowering transportation costs through pipeline construction currently blocked by the Obama administration.

Lower interest rates will not help trade issues with China or the impact of low prices to the oil patch, but those do considerable harm in other places.

The big Wall Street banks have been using access to cheap capital to finance risky trading and deal-making rather than making enough sound loans to businesses to support growth and jobs creation.

Low interest rates help weak corporations and developing countries sell bonds to investors, even though the former lack the staying power to weather tougher economic times when those come. A bubble is building in the so-called junk bond market.

Similarly, artificially cheap mortgages have boosted to bubble-level prices in choice neighborhoods, like those in Manhattan and San Francisco, and for agricultural land.

The longer the Fed keeps interest rates artificially low, the worse will be the inevitable adjustments in markets for both junk bonds and tonier real estate.

Even at 3 percent, the U.S. economy is broadly underperforming its potential. Coming out of a deep recession where unemployment reached double-digit levels, GDP growth should be 4 percent to 5 percent, and that would provide gainful employment for many of the nearly one-in-six men between 25 and 54 who remain jobless.

Solutions to their plight lie in reshoring lost manufacturing jobs, which requires managing globalization better, and removing constraints on the U.S. energy boom.

Standing up to Chinese protectionism, building more pipelines to bring western oil to eastern refineries, and generally freeing businesses of unnecessary regulations could cut the $500 billion trade deficit in half and create more than 3 million jobs. And that would do a lot to raise wages and reverse middle class decline.

Instead, the Fed’s obsession with inflation and low interest rates distracts public attention from the detrimental consequences of speculative investments, appeasement toward China, unnecessary dependence on foreign oil, and the administration’s anti-growth regulatory policies.

The time to raise interest rates has simply come and gone, and come again.