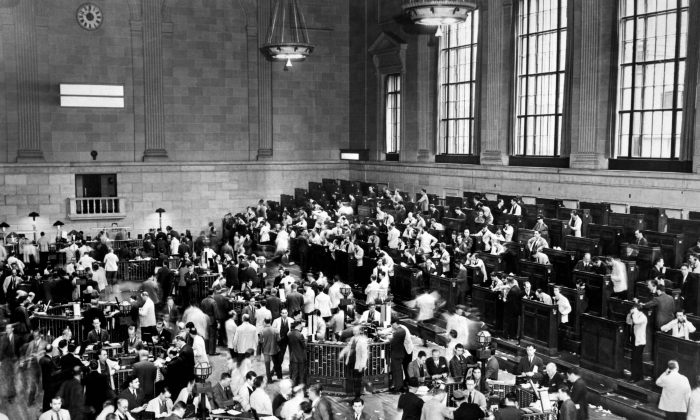 Traders rush in Wall Street as New York Stock Exchange crashed, sparking a run on banks that spread across the country in October 1929, the beginning of the Stock Market Crash. (OFF/AFP/Getty Images)
Business & Markets

Economists Explain Why Our Economy Crashes Every 18 Years

The U.S. economy has moved according to a set cycle for close to 200 years, and experts warn that if this pattern continues, we can expect another financial crisis starting this year, which will peak in 2019.

One of the first warnings of the last financial crisis came from U.K.-based economist and director of the Land Research Trust, Fred Harrison. He began warning of the trends in 1997, and in April 2005 warned that the property boom would only last for another three years before it would crash in 2008.

He went on record and told then-U.K Prime Minister Tony Blair about the looming crash. He also turned to the press and presented his data showing the trends. But he, like many others who came to similar conclusions, was ignored until the crisis came to pass.

Now, Harrison is again warning of a coming crash, and his predictions are again proving true. Just last year, he warned of the economic woes that have started rearing their heads in 2016.

The problem, he said, is the economy rises and falls like clockwork.

“We know that for centuries, the land value cycle has operated on an 18-year basis,” Harrison said in a phone interview. “The fact is, there is a very clear 18-year pattern, which is always intersected with a mid-term recession.”

Amar Manzoor, author of “The Art of Industrial Warfare” and creator of the 7Tao training system for manufacturing standards, has come to the same conclusion. He said in a phone interview, “This 18-year cycle has resulted in the massive decline of industry and has been the Achilles heel in the performance of Western economies.”

Steve Hanke of the Cato Institute, a think tank, noted the same pattern in a February 2010 report. He said the problem rests in the land-value cycle, which has a domino effect on the construction cycle, the business cycle, and then the overall economy.

While the world wars disrupted the cycles, Hanke noted statistics from “The Depression of 2008,” by Fred E. Foldvary, which show the land-value cycle, construction cycle, and business cycle returned to their pre-world war intervals in 2006, just ahead of the last crash.

If this pattern continues, the next recession may be just around the corner. Harrison predicts the midcycle recession will hit in 2019, and the current property market will peak in 2026 with a severe financial crisis on its heels.

One of the key factors often overlooked is that a good chunk of the U.S. economy is based on real estate. According to the National Association of Home Builders, residential investment and housing services constitute about 17 percent of the GDP.

The problem is that about 70 percent of the GDP comes from consumer spending and government health care spending, and these are impacted by changes in the business cycle.

The GDP still reflects what was shown in Adam Smith’s 1776 book “The Wealth of Nations,” that the three ingredients to a functioning economy are wages, profit, and rent. The book is regarded as a definitive text in classical economics.

According to Harrison, however, the neo-classical school “eliminated land from the radar.” “They view the world as a two-factor model, labor and capital, and they’ve buried the concept of land as a part of capital,” Harrison said.

Despite the pivotal role played by land and rent in the GDP, Harrison said, it is viewed merely as a subcategory of capital.

The problem with this view was shown clearly in the 2008 financial crisis. Harrison noted it was blamed on “bankers being foolish with their money,” when at a deeper level, it was “bankers engaged in the real estate market that caused the problem.”

“It was a real estate issue,” he said, noting that governments “haven’t done anything to prevent the next crash, because they’re watching the banks.”

“Economics today is the economics of a disembodied economy,” Harrison said, noting that economic projections need to consider land and natural resources.

The 18-year-cycle caused by land values was first pointed out by land economist Homer Hoyt in the 1930s, and a solution to the problem was first proposed by 19th-century journalist and political economist Henry George, who popularized the concept (fittingly known as “Georgism”) that the value of land and resources should be taxed, rather than income and investment.

He viewed the heavy taxing of wages, coupled with systems that lock people out from the value of natural resources, as being equivalent to slavery.

One of the key causes of the cycle is people getting priced out of the market.

“The real estate cycle is determined by the interest rate,” Harrison said. “Today’s record low rates are provoking an extra-ordinary increase in house prices very early in the current cycle.”

“If governments want to control the cycle, they need to shift the incentives—that means rebalancing the tax regime by raising the rate of property taxation and reducing taxes on incomes and profits,” he said.

The tax on land proposed by George could theoretically break the 18-year cycle by disrupting the cycle of the real estate market pricing people out. Since the tax is based on value of land, including real estate value, owners would be less likely to continually inflate the values.

“We’ve been so brainwashed into just not recognizing the significance of land and rent, that the economic cycle acts as it does, creating havoc, and it repeats itself when it could be so easily corrected,” Harrison said.

Taiwan is an example of this system in action. After the split between Taiwan and mainland China, the communist mainland believed in seizing and controlling the land itself, while democratic Taiwan believed in allowing a free market while taxing land rather than individual wages.

“The reason why China is in deep-deep trouble was because they allowed the local bureaucrats to take the land, and the whole system is in chaos,” Harrison said. “And yet, right at their doorstep they have the example of Taiwan to learn from.”

He said Denmark is another example, which also adopted George’s system. Despite having few natural resources, they’re ranked as the happiest nation on earth, and they have the world’s best housing market.

“Here you have an advanced economy with very poor natural resources, and their per-capita income is higher than the U.K.’s,” Harrison said.

Of course, many governments aren’t showing signs of changing these systems, and the coming economic downturns are likely inevitable.

Harrison believes the coming financial crisis could be the worst we’ve ever seen for the simple reason that the global economy is now interconnected like never before. He warns it could lead to a situation where major powers are left to fight or fall.

“We either deal with this peacefully, or we end up in a hot bloody war,” he said. “All the signs are we’re going to end up with a bloody war because there’s no other way out of it.”

Amar Manzoor has approached the looming financial crisis from the standpoint that governments aren’t likely to change the way taxes work. Instead of talking to governments about fixing it, he created the 7Tao system to allow businesses to weather it and fight back.

Manzoor has been running the 7Tao industrial warfare training method for U.K. businesses in cooperation with the British government education system. The system is run globally for all organizations as SPECTRE through BLACKOPS Partners Corporation.

“I don’t think personally that governments have the inclination to reform. They simply will not look in that direction,” he said. “So it’s down to the businessmen to learn how to survive the difficulties that lie ahead.”

“Vested interests would rather have a world war than change their tax system,” he said.

Amar noted the looming crisis is closely tied to the global economy and the impact would be global.

This year, he warned, the West is likely to feel the “boomerang effect of the Chinese housing collapse,” and this could cause downturns in commodity markets, bond markets, and currencies traded in the global economy.

“China suffers from the same 18-year real estate cycle which the Western world rests upon, and naturally, being the second- biggest economy in the world, if they sneeze, we all catch a cold,” he said.

When the midcycle recession hits in 2019, he said, “the effects will be catastrophic as the recession bites as deep as the 2008 crisis.”

And when the full 18-year cycle comes to an end in 2026, Manzoor said the “un-payable mortgages, catastrophically high house prices, and unsustainable land prices will lead to the greatest collapse in the history of mankind.”

He also warned that governments are already gearing up for conflict, and the military build-up now taking place among most mid-to-large powers will also be a factor.

Manzoor compared it to a watering hole when all the animals in the jungle come to drink what’s left. He said, “The question is, what happens at this waterhole? Well the animals will fight each other to get to the water; they will defend their water position and attack any competitor who tries to take their water.”

With the global economy now so interconnected, and “so many competitors all seeking a limited slice of the pie, it is inevitable that there will be economic conflict over decreasing resources.”