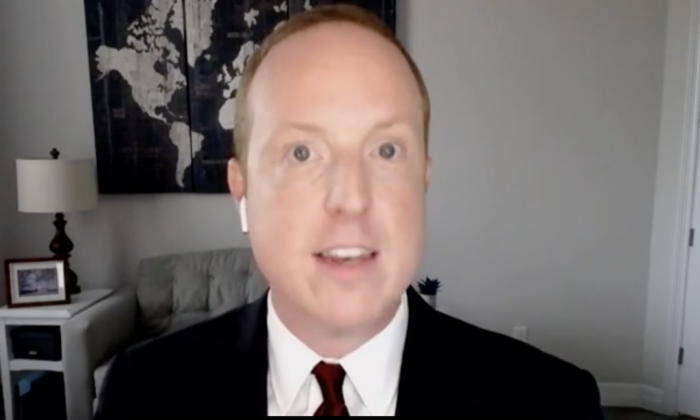 With U.S. prices higher than expected in all areas including food, shelter, and gas, the Biden administration’s student debt relief plan is really a “redistribution scheme” that will further fuel inflation, according to Vance Ginn, economist and founder of Ginn Economic Consulting.

The plan is “what I’ve really been calling a redistribution scheme from those who didn’t go to college and don’t have student loans to everyone who has student loans. Only about 33 percent of Americans have graduated with a bachelor’s degree,” Ginn said during a Sept. 14 interview with the NTD TV News Today program.  “This is a huge shift in the amount of money that people are paying and … it also fuels more inflation.”

The Biden-Harris administration, in order to advance their “equity” agenda, released a plan which will cancel $10,000 of debt for people earning less than $125,000, cap monthly payments at five percent of a borrower’s monthly earnings, forgive loan amounts of $12,000 or less after 10 years of payments, and mandate that the federal government cover the unpaid interest for those in the low-income bracket.

President Joe Biden praised the debt relief plan, which he said was designed to help those that don’t have “family wealth,” including black and Hispanic students.

“They don’t own their homes to borrow against to be able to pay for college,” Biden said at a press briefing at the White House on Aug. 25.

When asked if this action was fair to those students who had paid off their student loans, Biden shifted the topic to billionaires.

“Is it fair to people who in fact do not own a multibillion-dollar business if they see one of these guys give them all a tax break? Is that fair? What do you think?” Biden asked.

And while Democrats celebrated the “Inflation Reduction Act” legislation at the White House on Sept. 13,  Ginn criticized the spending bill and the current state of the economy.

“I don’t know how you can celebrate an 8.3 percent [annual] inflation rate and interest rates soaring,” he said.

However, Biden touted the legislation as being able to reduce the gross national debt of more than $30 trillion by $300 billion.

“This bill will lower the deficit. This bill alone is going to lower the deficit by $300 billion over the next decade,” said Biden during a speech about the new law on Sept. 13 at the White House. “So, I don’t want to hear it anymore about ‘big spending Democrats.’ We spend, but we pay.”

Contrary to what Biden says, Ginn said inflation in large part is caused by congressional overspending, which increases the national debt, leading the Federal Reserve to print more money that goes into circulation, and creating a situation as we see now where there is too much money chasing too few goods.

Ginn said although gas prices have decreased somewhat recently, they are still 25 percent higher than the year-over-year increase and overall inflation is at a 40-year high. In addition, “people’s wages are not keeping up with inflation. In fact, if you adjust for inflation, wages are down 3.4 percent,” he said.

Ginn’s advice to Americans is to save money in order to be prepared for future price increases.