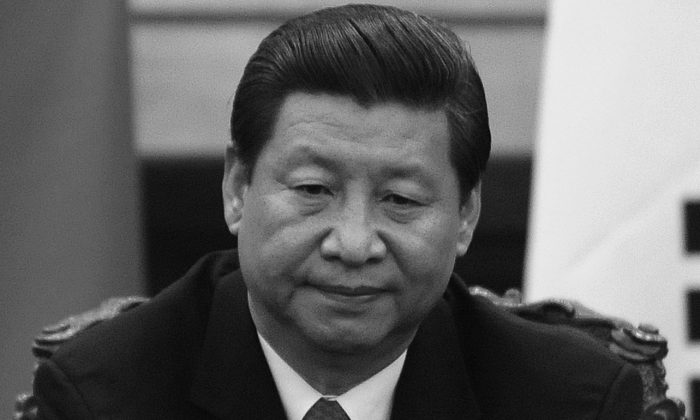 In this file photo Secretary General Xi Jinping is pictured in the Great Hall of the People in Beijing on June 27, 2013. Xi's political and ideological tightening may end up clashing with the economic reforms that are currently being attempted. (Wang Zhao/AFP/Getty Images)
China

Economic Liberalization and Political Control May Clash in China

Recent moves by China’s central bank to free up lending rate controls, and refusing to inject money during a serious cash crunch in June, appeared to signal that Chinese premier Li Keqiang is serious about carrying out economic reform. Any hopes of political reform, however, have faded as Party leader Xi Jinping has stepped up Maoist rhetoric and symbolism.

Li has called for less political control in the economy and said that the government should delegate power to maintain growth.

Unlike Li who is seeking to loosen the reigns, Xi is attempting to ramp up the power of the state and its ideological control. As a princeling, the child of the founding generation of the Party, in particular, he is reluctant to change the old system, according to a report by Hong Kong’s Open Magazine in early June. Some commentators are convinced that the two goals will eventually come into conflict.

In an inspection tour to Xibaipo, an old revolutionary base in Hebei Province, from July 11 to July 12, Xi urged Party members to “ensure that the color of red China will never change.”

Xi also stressed the importance of the “Two Musts,” the core of the Xibaipo spirit, which was given by late Party leader Mao Zedong over 60 years ago when he admonished Chinese Communist Party (CCP) members that they “must remain modest, prudent and free from arrogance and rashness in their style of work,” and “must preserve the style of plain living and hard struggle.”

He continued: “It is exactly because the Party has persisted in practicing the Two Musts, that the Party is able to stand the test of time and maintain the flesh-and-blood relationship with the masses.”

According to Mao, however, Two Musts are undergirded by “the Marxist-Leninist weapon of criticism and self-criticism,” according to Chen Ziming, an independent scholar who studies Party politics.

During a trip to Guandgong in last December, Xi lamented the collapse of the Soviet Union, and remarked that “There wasn’t a single ‘real man’ willing to stand up to resist it.”

And at a high-profile Party workshop last November, Xi said although socialism with Chinese characteristic took shape during the period of reform and opening-up, “it was also based on the socialist system established since 1949 and the following 20-plus years of socialist construction.”

“People cannot deny what was done before the reform and opening-up based on what happened after it and vice versa,” Xi added.

His remarks stirred a heated discussion online, since by not denying what was done before, is saying that Chinese people shouldn’t deny the disaster the Great Cultural Revolution brought to the country.

A document known by insiders as “Central Document No. 9” and issued by the General Office of the Central Committee in May, warned officials to combat “dangerous Western values.” It also asked journalists and college teachers to steer clear of “seven unmentionable topics:” universal values, press freedom, civil society, citizens’ rights, the party’s historical aberrations, the “privileged capitalistic class,” and the independence of the judiciary.

The reason there’s Maoist revival is because Xi and the princelings–the children of the founding generation of the Party, have reached a consensus on taking the path of what is being termed “nationalistic socialism” (guojia shehui zhuyi) and maintaining the authoritarian one-party state, specifically led by the princelings, according to Li Weidong, a former magazine editor and political commentator who has been in constant contact with princelings for the past several years.

“In order to achieve this, they opted to revive Maoism and use Mao as their ‘positive asset,’” Li said during an interview for an article published on Deutsche Welle on July 4.

Xi has been promoting his Chinese dream since last December. It includes achieving the goal of building a well-off society by the time the Party celebrates its 100th anniversary, which is around 2021 when Xi is still Party leader.

As long as realizing the “great rejuvenation of the Chinese nation” is accomplished by then, “whatever past mistakes, including mistakes made by Mao, can be forgiven,” Li said. The Party can prove that it has brought glory to China by implementing the China model, thereby strengthening its legitimacy to rule, he added.

Li is pessimistic about China’s future under Xi’s leadership. He said Xi is on a mission to safeguard the red empire for the princelings; he resolutely rejects political reform and universal values, and will stubbornly stay on the path of nationalistic socialism in order to realize his “China dream,” according to Li.

China’s economy will keep going downward for years to come, due to years of monopoly of state-owned companies by the princelings and their elite cronies, Li commented.

He added: “Without a political reform specifically targeting the privileged capitalistic class, the path Xi takes won’t work at all.”