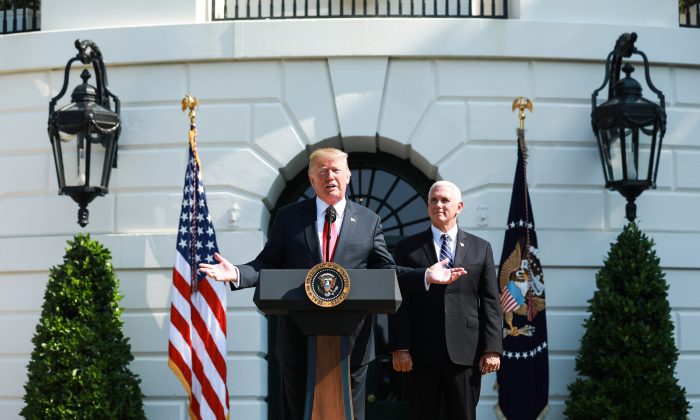 President Donald Trump delivers remarks, as Vice President Mike Pence looks on, about the economy and second quarter GDP growth of 4.1% on the South Lawn of the White House in Washington on July 27, 2018. (Samira Bouaou/The Epoch Times)
Trump Administration

According to the report released by the Bureau of Economic Analysis (BEA), strong consumer and business spending, as well as a surge in exports buoyed the economic growth in the second quarter.

“We’re on track to hit the highest annual average growth rate in over 13 years,” President Donald Trump said on July 27, speaking from the South Lawn of the White House.

“I will say this right now. I’ll say it strongly, as the trade deals come in one by one, we’re going to go a lot higher than these numbers and these are great numbers.”

In addition to the solid second quarter result, the Commerce Department revised its first-quarter GDP growth from 2 percent to 2.2 percent.

The second quarter growth was the fastest one since the 4.9 percent growth recorded in the third quarter of 2014 and the third-best growth rate since the 2008 economic recession.

“Stronger-than-expected consumption growth confirms that tax-cuts are having the expected effect,” stated Citi in a report.

Each point means a trillion dollars and 10 million jobs, he added.

The economy ramped up last year and hit the Administration’s 3 percent growth target in the second and third quarters of 2017. But then it slid below 3 percent in the last two quarters.

“These numbers are very, very sustainable. This isn’t a one-time shot,” Trump said.

Treasury Secretary Steven Mnuchin echoed Trump on July 29, saying that the United States has entered a period of sustainable growth.

“We can only project a couple of years in the future,” Mnuchin told Fox News Sunday.

“But I think we’re well on this path for several years. I don’t think this is a one or two-year phenomenon. I think we definitely are in a period of 4-5 years of sustained 3 percent growth at least.”

Trump said the decline in the trade deficit was one of the “biggest wins” in the BEA report and it is “very dear to my heart because we’ve been ripped off by the world.”

The trade deficit in the second quarter dropped by $52 billion, adding 1.1 points to the GDP growth.

“We have been highlighting that the 1.1 pp boost from net exports is unlikely to repeat in future quarters,” stated Citi.

“However, we disagree with the narrative that exporters raced to deliver products ahead of tariffs coming into effect. Rather, strong soybean exports were a result of low US soybean prices. Our read of the facts implies a less dramatic reversal in net exports in Q3.”

The results were “considerably stronger” than expected, stated Goldman Sachs in a report.

“This morning’s data confirms that growth has accelerated and that inflation is running close to the target,” the report said.

The negative contributors to the economic growth in the second quarter were private inventory investment and residential fixed investment.

The growth “was mostly offset by a drag in inventories (-1.0pp) that seems likely to reverse in the third quarter, stated Goldman Sachs.

According to Adam Goff, managing director at Russell Investments, the news had little impact on the market as much of the positive news was already priced in.

“Investors were by-and-large already expecting the good news, with most economists having already predicted a strong second-quarter GDP growth rate,” he said in an article posted on Seeking Alpha.

The second quarter’s strong GDP result will be another reason for the Federal Reserve to increase interest rates this year, according to experts. The Fed signaled earlier that it may have two more hikes this year.