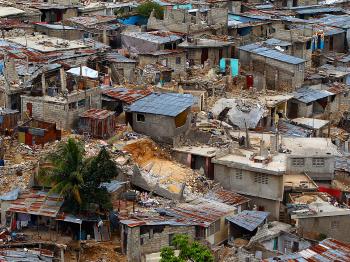 Standing and collapsed homes cover the hillside in the Le Vallee de Bourdon neighborhood in Port-au-Prince, Haiti, February 18, 2010 More than a month after the 7.0 earthquake that destroyed much of Port-au-Prince hundreds of thousands of people are livin (Chip Somodevilla/Getty Images)
International

Peter Sedik
View profile
Follow
biggersmaller
Print
Reconstruction of post-quake Haiti might require more economic assistance than previously anticipated. That is one of the findings of a study released by the Inter-American Development Bank (IDB), which estimates that rebuilding Haiti’s homes, schools, and infrastructure could cost as much as $14 billion.

IDB research economist Eduardo Cavallo told The Epoch Times that although they took into account some regional-specific characteristics of Haiti in their analysis, this event was quite unique.

“It is the most destructive event a country has ever experienced when measured in terms of the number of people killed as a share of the country’s population. This is probably the single most important reason for the very high damage estimates that we get,” Mr. Cavallo explained.

The Jan. 12 earthquake, which registered 7.0 on the Richter scale, hit about 10 miles southwest of the Haitian capital, Port-au-Prince, and the latest official estimate states that a total of 230,000 people were killed.

The quake also caused massive destruction to private and public assets. Many priceless buildings were destroyed or severely damaged, including the Presidential Palace, other government properties, the National Cathedral, and churches.

The IDB, established to support Latin American and Caribbean economies, calculated the estimated cost by applying statistical methods to data from previous disasters stored in the Emergency Events Database, which is maintained by a research center at the Catholic University of Louvain in Belgium.

IDB experts factored in data such as the magnitude of the catastrophe, number of deaths, and per capita gross domestic product, from approximately 2,000 natural disasters that occurred all over the world during the last 40 years.

The number of fatalities caused by the quake in Haiti is still being discussed at the IDB. With an initial best-case scenario estimate of 200,000 deaths, the estimated damage was calculated to be $7.2 billion. Using the same methodology, if the death toll reaches 250,000, the potential damage is $8.1 billion.

However, the economic costs could rise much higher. The data shows that there is a 90 percent likelihood that the funds needed to rebuild will be between $4.6 billion and $13.9 billion.

The study concludes that raising funds to cover reconstruction “will require many donors, bilateral, multilateral, and private. Hence excellent coordination of funding and of execution will be the key to ensuring the efficient use of funds.”

The IDB is currently working on a post-disaster needs assessment, to be released in the following months, which should more closely analyze the reconstruction needs and projected costs.