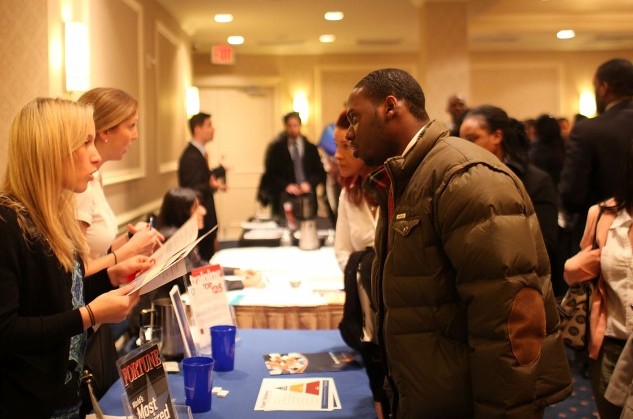 Job seekers attend a career fair in Midtown Manhattan on Feb. 6. According to Gallup only around 11 percent of Americans rated the current economy as either good or excellent and only around 29 percent said the economy is getting better. (Spencer Platt/Getty Images)
US

Many Americans had little optimism for the U.S. economy in general in 2011, with only a few states and regions having less pessimism, according to a poll from Gallup.

Gallup surveyed nearly 175,000 Americans about the current and future economic prospects throughout the United States.

When compiling states individually, Gallup noted, “There are no clear patterns in the states that rank in the top and bottom 10 in economic confidence. For example, the top 10 states vary by region and political leanings.”

Overall, residents surveyed in Washington, D.C., had the highest confidence in the current and future economy of the United States, the poll said. Nearly one in five Washington residents rated the economy as good or excellent and 50 percent of residents said it is getting better.

The poll also found that North Dakota, Minnesota, Nebraska, and Maryland had the most confidence in the economy. In contrast, West Virginia, Maine, Oregon, Rhode Island, and Mississippi had the lowest.

Gallup concluded, “Americans overall and in every state remain more negative than positive about the economy,” which will be a challenge that President Barack Obama needs to overcome during an election year.

However, in the past month, the overall U.S. economy has improved, with recent job growth. Currently, according to recent employment reports, the overall unemployment rate is at around 8.3 percent.