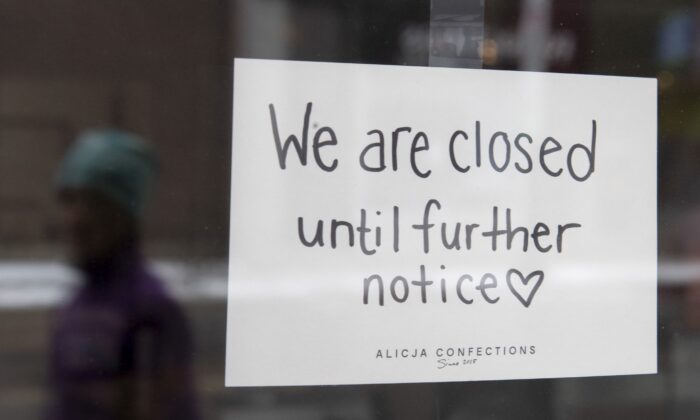 A sign on a store window in Ottawa on March 23, 2020. Most economists agree that many small businesses will not survive the shutdown to prevent the spread of COVID-19. (The Canadian Press/Adrian Wyld)
Canada

Most economists agree that a large number of small businesses will not survive the government-mandated shutdown to prevent the spread of COVID-19, and predict that businesses—and people—who do make it through the crisis will live with permanently higher taxes due to record-high government deficits.

“The Canada that we knew is no more,” said Bill Tufts, author of “Pension Ponzi” and consultant to governments and business groups. “We’re in an economic collapse right now.”

Over 5.4 million Canadians have applied for the Canada Emergency Response Benefit (CERB), suggesting a 25 percent unemployment rate. The CERB is one-quarter of the $107 billion federal response to the virus pandemic.

“The government is doing what Keynsian economics says: Just send the money to the people, so they’re going to spend it,” says Gerard Lucyshyn, economics professor at Mount Royal University in Calgary. “The dangerous one is going to be sending money to the firms. What we learned in Reaganomics is that the firms tend to keep it.”

While big business takes what it can, small business just hopes to survive. Currently, it’s business as usual for only one in five businesses, according to internal surveys done by the Canadian Federation of Independent Business. Thirty percent can’t pay this month’s bills and 39 percent worry about permanent closure.

“The CFIB has been turned into a suicide crisis centre. And it looks like a lot of people won’t be getting the emergency benefit,” says Tufts.

The big problem, he says, is that when small business disappears, so does government revenue.

“Almost 70 percent of the taxes are collected by small business. All of the GST, HST, to CPP deductions to employment insurance deductions … property taxes, licences, and fees and fines.”

The Parliamentary Budget Officer announced on April 9 that Canada will have a $184 billion deficit in 2021. The amount is three times higher than the previous record deficit of $56 billion in 2009. It also represents a substantial addition to the federal government’s accumulated debt of $714 billion.

“Unfortunately, all this new debt will mean tough times are ahead for almost everyone,” says Aaron Wudrick, federal director of the Canadian Taxpayers Federation. “This is going to take years to pay down. Provincial governments will be looking at challenges of a similar scale.”

Alberta’s debt, already at $72 billion, may never vanish. “It will be 75 years—if we have the best years ever, to pay off the debt like we did in 2005 when we were under Ralph Klein,” Lucyshyn says.

Investments have also suffered. The TSX hit an all-time high on Feb. 20, only to fall by 38 percent over the next five weeks.

“You have literally people’s life savings evaporating,” Lucyshyn says. “All those senior citizens out there—whatever they had their money in is gone now.”

Lucyshyn believes a better government response was possible. “The bureaucracy and the politicians are culpable for failing to be prepared for this pandemic; they were advised this pandemic would happen over the last 10 years,” he says.

“In Singapore, they put on their masks and gloves and began testing, tracing, and [implementing] containment programs, and allowed businesses and some universities to stay open with strict gathering size guidelines. That’s why their economy didn’t sink as much as ours. In Canada, our leaders hit the big ‘off’ button and now we will suffer the economic consequences.”

Governments won’t hit the “on” button for a while, either. In Ontario, Premier Doug Ford extended his shutdown of non-essential businesses until May 14.

“I think we’ll see a massive boom as soon as they lift it, but the million-dollar question is, when will they lift it?” Lucyshyn says.

“Every restaurant in the country needs to restock their entire supply of food like the moment they lift those orders. So, just purely on that principle, how much work is there going to be? And the first thing you’re doing to do, and everyone else is going to do, is you’re going to go to the pub for a beer.”

Tufts is less hopeful. “As far as I can tell, it will be a huge set of dominos that will keep falling for who knows how long,” he says. “There’s no way that businesses will be able to respond and bounce back that quickly.”

On April 8, the City of Vancouver asked the Province of British Columbia for $200 million just to maintain operations. Newfoundland and Labrador teetered on the edge of bankruptcy before the crisis began, and now it could even face a food crisis. Oceanex, which ships much of the island’s vegetables, beef, and pork from Montreal and Halifax to St. John’s, has said it will have to reduce or suspend service unless the federal government helps.

Post-pandemic, Wudrick says, governments will have to greatly rein in the spending.

“Once the immediate crisis ends, it will be important for governments to make tough but necessary choices to get the books back in order,” he says. “Prioritizing spending will become crucial and there will be no money for politicians’ pet projects.”