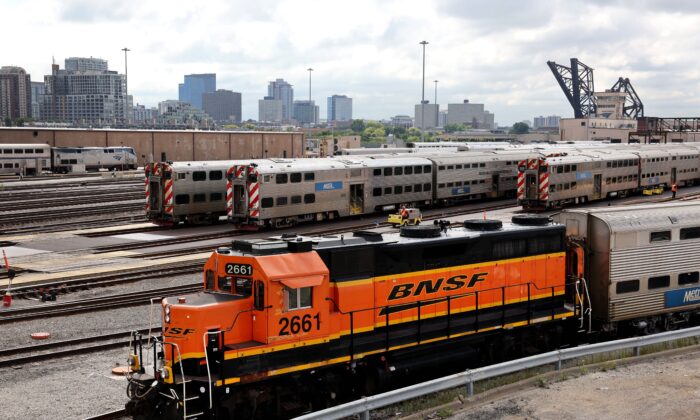 Congressional Democrats are facing tough calls over an impending strike of rail workers, which observers fear could cause an economic catastrophe for the United States’ already strained supply chain.

Railroad workers’ unions and major U.S. railroad services over the past several weeks have been involved in negotiations over wages and the railroads’ strict attendance policies, which limit workers from taking sick days.

Under current law, the right to strike is recognized, but rail workers will not be permitted to begin a strike until Sept. 16, which is only a few days away. The strike would be legally permissible because it falls 30 days after the Presidential Emergency Board (PEB) released guidance for negotiations, calling for a substantial pay bump, back pay, and cash bonuses.

Over the past year, the U.S. supply line has faced a series of challenges and shortages. A railroad workers’ strike, observers fear, would reverse any progress that has been made in restoring the integrity of the still-fragile supply chain.

Though they still have a few days to hammer out a deal, or at least to extend the striking deadline, some railroads are already cutting back on traffic in preparation for the strike—placing pressure on Congress to act quickly.

For Democrats, who have long portrayed themselves as pro-working class and pro-union, the situation is a tough dilemma for the party. If Democrats find themselves forced to legally bar the strike from moving forward, it may alienate large swaths of their base ahead of crucial midterm battles; but if they allow the strike to go ahead, and the supply chain crumbles, Democrats will find their electoral prospects similarly grim with moderates.

Though some Democrats are preparing to take the former course, most—including Speaker of the House Nancy Pelosi (D-Calif.)—are hoping that unions will agree to push back the strike and continue to negotiate.

In comments on the issue, Pelosi tried to balance the competing political demands of remaining favorable with both the unions and the general American public.

“I have been engaged in conversations with the White House and with the unions involved in this,” Pelosi said when asked about the issue during a Wednesday press conference, her first since Congress returned from its August recess. “We’re all hoping that negotiations will continue so there is no real strike.”

She continued, “[Labor Secretary Marty Walsh] is very much hoping that we can get a resolution of this.”

Pelosi said the main area of disagreement is over sick leave for the workforce.

The White House, however, has said it’s already preparing for the possibility of having to substantially reorder the supply chain to try to avert a catastrophe.

“We are working with other modes of transportation, including shippers and truckers, air freight, to see how they can step in and keep goods moving in case of this rail shutdown,” White House press secretary Karine Jean-Pierre told reporters during a Tuesday press conference.

Business Roundtable CEO Joshua Bolten warned on Sept. 13 that if the strike goes ahead, the nation could face “economic catastrophe,” a scenario already being prepared for by some big business interests.

In Congress, many Democrats are echoing Pelosi’s sentiments—but are bracing for the possibility of more dramatic congressional action.

House Majority Leader Steny Hoyer (D-Md.) said on Sept. 12 that “if needed,” Congress would pass legislation to stop a strike.

Democrats also face the problem of likely GOP resistance in the Senate to any proposal that goes further than the PEB recommendations. Behind the scenes, some Democrats have been hoping to impose a more comprehensive contract on the railroad companies weighted more in favor of the unions, but Republicans have made clear that they stand by the recommendations laid out in the PEB, foreshadowing trouble for Democrats if they hope to stay in the good graces of union workers and leaders.

On Sept. 12, Sens. Richard Burr (R-N.C.) and Roger Wicker (R-Miss.) unveiled a congressional resolution that would impose the PEB guidelines on unions and railroads alike, a resolution in line with the hopes of railroad companies and their shippers.

“The PEB recommendations are a fair and appropriate solution to a years-long negotiation process, but labor unions are continuing to hold the entire nation’s rail system hostage as they demand more,” Burr said in a statement on the issue.

In this situation, Speaker Pelosi and Democrat leaders may have a headache in wrangling their ideologically-divided caucus behind a Senate-passable resolution that doesn’t go as far as progressives might like.

So far, the majority of rail unions—10 of the 12 involved—have reached an agreement with their railroads or are in the process of wrapping up agreements.

However, the Brotherhood of Locomotive Engineers and Trainmen and the SMART Transportation Division, which represent over 57,000 crucial rail workers, have not reached an agreement and say they are holding out for better terms.

Specifically, the two unions are demanding that workers be permitted to take unpaid time off work for medical visits, illness, or family emergencies. Workers on rail lines have long complained about the strict attendance policies enforced by railroads, which often see violators penalized under company policies.

The two union holdouts say the railroads are refusing to so much as negotiate for these terms, instead relying on the hope that Congress will intervene in the railroads’ favor, as indeed it seems set to do.

If Congress were to pass a resolution imposing a contract on the unions and railroad companies, even one that doesn’t grant the unions’ demands, workers will be legally barred from carrying out a strike.

In a statement on this possibility, the unions wrote: “Our unions will not cave into these scare tactics, and Congress must not cave into what can only be described as corporate terrorism.”

With ideological splits among Democrats, squabbles between Democrats and the GOP, and the realpolitik considerations of a rapidly-approaching midterm battle, it remains unclear how the situation will be resolved.

Ultimately, Democrats’ best hope is that the unions and the railroads will agree to continue negotiations past the Sept. 16 deadline, as either option—the imposition of a Senate-passable contract on unions or the further breakdown of the U.S. supply chain—could weaken Democrats’ already-dire outlook in November.