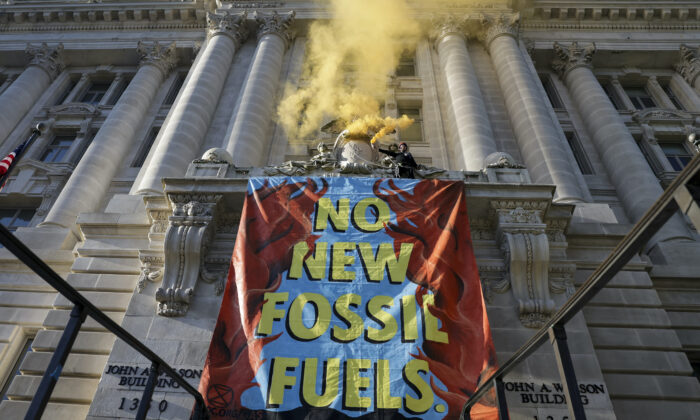 An environmental activist with the group Extinction Rebellion DC scales the Wilson Building next to a sign that reads "No New Fossil Fuels", as part of an Earth Day rally against fossil fuels in Washington on April 22, 2022. (Kevin Dietsch/Getty Images)
By Lee Harding

A climate change activist diagnosed with eco-anxiety has requested a medically assisted death, a sign that some observers say indicates restrictions on the practice have quickly become flimsy since legalization in 2016.

Howard Breen, a 68-year-old eco-activist from Ladysmith, B.C., is a member of the group Extinction Rebellion, which describes itself as an international movement that uses “non-violent direct action and civil disobedience to persuade governments to act justly on the climate and ecological emergency.”

According to a recent article in Vice magazine, in 2017 Breen’s doctor diagnosed him with eco-anxiety and biosphere-related depression. He told Vice his condition had become “debilitating.”

“The depression that I’m feeling around the state of things, and my inability to not be apprehensive about the future of my children specifically, is a huge concern for me,” he said.

Breen applied for medical assistance in dying (MAiD) in February 2021, but a medical assessor told him his condition was not an “acceptable, permissible malady” for MAiD. Then the federal government passed revised MAiD legislation—Bill C-7—in March 2021 stipulating that as of March 17, 2023, someone whose only medical condition is a mental illness would be eligible, so Breen is reapplying.

Alex Schadenberg, executive director of the Euthanasia Prevention Coalition, says even currently there’s not much to stop MAiD for someone with mental illness if the right people can be found to approve it.

“Bill C-7 said that someone could die by euthanasia for mental illness alone, but the government declared that because they had no rules around this type of killing. Therefore, there would be a two-year moratorium going to March 2023,” he said.

“The two-year moratorium is not going to stop somebody who’s a radical pro-euthanasia-type doctor or nurse from doing it because there’s nothing in the law that says you can’t do it.”

As evidence, Schadenberg points to the case of a Nova Scotia man with depression and declining mental faculties who was approved for euthanasia. His wife took the case to court with the help of Schadenberg’s organization, but she found no recourse.

“[The judge] said the law doesn’t give us any ability to question. All the law says is, as long as two physicians or medical practitioners … have approved, you’re good to go. … And it only says that they have to be of the opinion that you fit the criteria,” he explained.

“It’s just not possible to prosecute a doctor under that language. And on top of it, it’s going to expand because—as you know this from euthanasia doctors who are running clinics now in Canada—some people are really into the idea. They think it’s a wonderful idea.”

Douglas Farrow, a McGill University professor of theology and ethics who is opposed to euthanasia, says society has rejected the foundational understanding that makes resisting the procedure possible.

“There is no way to stop this very rapid slide down that slippery slope without a major revisiting of the question of whether human life is a gift from God or not. As long as you don’t want to talk about a Creator and life as a gift, there’s no way to arrest the slide,” Farrow said in an interview.

Farrow says the removal of belief in God has left a void in the moral framework of how people interact with each other and with creation.

“One of the challenges that we have in this field is that it’s about politics, that people are not legitimately distressed, or that it’s not a legitimate mental health condition,” Card told Vice. “So I’d be surprised if his case gets accepted. There’s too much stigma surrounding both suicide and climate anxiety.”

The Epoch Times attempted to get comments from Breen and Card but didn’t succeed.

Breen has actively taken part in a number of high-profile Extinction Rebellion protests. This includes super-gluing himself to a log boom in Nanaimo, B.C., last June in an attempt to disrupt the forestry industry, and walking onto the tarmac at Nanaimo Airport last October with plans to spray paint the words “shut down runways to shut down runaway climate extinction” on the tarmac.

Farrow says this context raises reasonable questions as to whether Breen might be wanting to use his death as an ultimate statement to the world about his cause.

Schadenberg says he is unsure how much of Breen’s request for MAiD is for the cause and how much it is sincere. Either way, he is concerned that if the request is approved, eco-anxious euthanasia could become a “contagion” that catches on.

“If you look at this generation of young people who have been told a lot of things about the universe and are in total fear of the world ending sometime within their lifetime, you can see there’s a lot of eco-anxiety out there,” he said.

Editor’s note: This article was updated on attempts to get comments from people mentioned in the report.