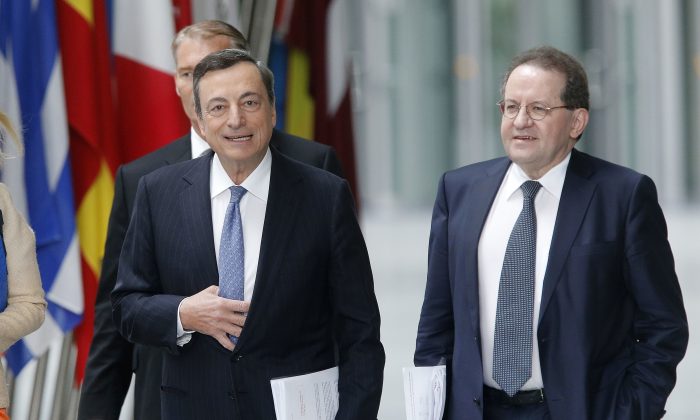 President of the European Central Bank Mario Draghi, left, is on his way to a press conference in Frankfurt, Germany, Thursday, July 21, 2016, after a meeting of the governing council. At right vice president Vitor Constancio. (AP Photo/Michael Probst)
International

FRANKFURT, Germany—The European Central Bank says it’s ready to give the eurozone a further dose of stimulus if Britain’s vote to leave the European Union starts to weigh on the region’s economy.

But its president, Mario Draghi, stressed Thursday that the bank would need more time to monitor the situation and refrained from any clearer indications of what would push its hand.

Britain’s unprecedented vote to leave the EU could hurt trade in the region and weigh on business confidence as it could take years to establish new trade relations. While it’s still early to tell what the full effect of the vote will be, many businesses in Europe are expressing concern.

At its first meeting since the June 23 vote, the ECB decided to leave its key interest rates on hold at record lows. But at a subsequent news conference, Draghi said the central bank had the “readiness, willingness, ability” to help the eurozone economy.

“Over the coming months, when we have more information, including new staff projections, we will be in a better position to reassess the underlying macroeconomic conditions,” he said.

Analysts say the ECB could opt later this year—in the fall or winter—to extend its bond-buying stimulus program past its expiry date of March 2017. Under the program, the ECB currently buys 80 billion euros ($88 billion) in bonds a month. The step pumps newly created money into the banking system. The hope is that will increase lending and raise inflation to levels more consistent with steady growth.

That program is ongoing and was stepped up as recently as March, meaning the ECB has not yet had a chance to see the full impact of the stimulus.

Beyond the bond-buying, the central bank has lowered its benchmark interest rate for lending to banks is zero. And it has imposed a negative rate on deposits left with it by commercial banks of 0.4 percent, a penalty intended to push them to lend the money.

Europe is enjoying a modest economic recovery but inflation of 0.1 percent is abnormally low and unemployment is falling too slowly to make people in countries such as Spain and Greece feel good about the economy.