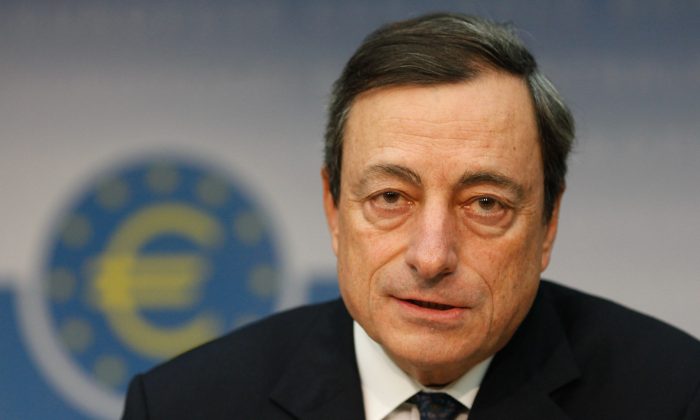 Mario Draghi, president of the European Central Bank (ECB), speaks to the media following the first meeting of the ECB Governing Council after he took the helm, in Frankfurt, Germany, Nov. 3, 2011. (Ralph Orlowski/Getty Images)
News

You know something is wrong when somebody has to pay himself instead of being paid for doing something.

Yet, this moral and financial oxymoron is exactly what the European Central Bank (ECB) enacted Thursday by charging banks on deposits they hold at the central bank (0.1 percent) in a desperate effort to lower rates and spur lending. So the banks are lending money to the ECB, but they have to pay for it.

The ECB also hopes the move will push the euro lower, spur inflation, and ignite some growth in the ailing eurozone. But what they really did is declare the system bankrupt.

The futility of this maneuver has been discussed on these pages before. Because of the closed nature of the currency system and the principles of double-entry bookkeeping, the size of the deposit facility will not change, so that money will not be put to productive use either way.

What it will do is make banks scramble to find other ways to stash their surplus cash and drive down rates in the money markets.

In an environment of zero percent interest rates across the globe, it is worthwhile taking a step back and contemplating what this actually means.

Over the long term, the prevailing rate of interest should reflect the return on capital in an economy. This means the gains generated by saving, investing, and producing. In most developed countries, this rate has averaged around 6 percent historically, a reasonable number.

In practice, this means someone with excess capital (or savings), lends out his surplus in the market and is compensated for different risks, such as default or inflation, as well as a premium for making his funds available. The borrower goes out and invests the funds to produce goods and services. If everything goes well, both the entrepreneur and the capitalist get their fair share of the profits of positive economic activity.

Conversely, if the rate of interest is zero or negative, it means there are no meaningful returns to generate from economic activity. In other words, the system is bankrupt.

Of course, policymakers will claim the main refinancing rates are short term and they will only keep them low for a short period of time. The problem is they have been saying that for five years already and longer-term rates, such as the 10-year Treasury rate, follow the short-term benchmark.

Without meaningful returns on savings and investment, the private sector and the government alike are pushed to consume rather than build wealth for the future. This is akin to the caveman who has a bunch of seeds and can decide whether he wants to eat them now to still his hunger or grow a plant and eat the plant’s produce at a later time.

However, if the soil, just like our financial system, is infertile because of past excesses, eating the seeds suddenly seems to be the rational solution.

By punishing savers and discouraging real investment, it turns out he could not be further from the truth.