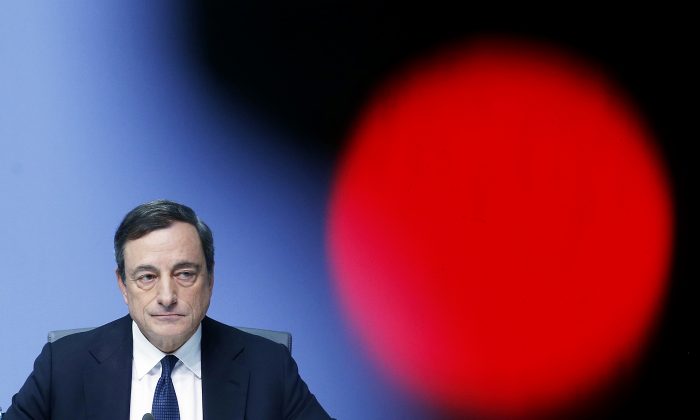 FRANKFURT, Germany—The European Central Bank on Thursday launched its most aggressive effort to date to revive the region’s ailing economy — a program to buy 1.1 trillion euros in government and private bonds starting in March.

The long-awaited program was an emphatic statement of the central bank’s willingness to do all it can to rejuvenate the economy shared by the 19-nation euro currency alliance. And it showed the multinational ECB’s readiness to assert its independence against critics in Germany, the eurozone’s largest and most politically influential country.

The ECB said it would combine purchases of government bonds with an existing smaller program of private bond purchases, to total 60 billion euros a month through September 2016. All told, the program will amount to 1.1 trillion euros ($1.16 trillion).

By pumping new money into the eurozone’s banking system, the ECB’s bond purchases are intended to make loans cheaper and easier to get so companies can invest, expand and hire.

The size of the program exceeded investors’ expectations, and ECB President Mario Draghi pledged to keep it going until the central bank sees a “sustained adjustment” in lifting inflation above dangerously low levels — in other words, for as long as it takes.

The U.S. Federal Reserve made a similar vow in launching a series of now-ended bond-purchase programs, which were credited with helping jump-start the U.S. recovery.

The value of the euro fell immediately after the ECB’s announcement Thursday in anticipation that the new money it will create will drive down the currency’s value. A lower-valued euro would make European exports more affordable overseas.

Fears have spread that the eurozone could face a period of chronic falling prices, or deflation, that can paralyze an economy — a problem that has afflicted Japan, the world’s third-largest economy.

There’s no guarantee that the ECB’s bond buying can succeed without further action by national governments in the currency union. Skeptics have suggested that the bond buying has been robbed of some of its potential effectiveness through delay and that Europe’s problems lie beyond the reach of monetary policy.

“We shouldn’t get carried away with the scale,” said Luke Bartholomew, investment manager at Aberdeen Asset Management. “It may boost inflation expectations at the margin, but will probably only have a small positive effect on Europe’s real economy.”

“A weaker euro should help exports a little, but it won’t suddenly make European economies much more competitive. That urgently requires structural reforms, which European leaders seem unwilling to push through. “

In Davos, Switzerland, German Chancellor Angela Merkel said before the ECB’s announcement that “whatever decision the ECB makes, it must not distract from the fact that the actual impulses for growth from sensible conditions must be created, and can be created, by politicians.”

“We have a lot of progress in many countries,” Merkel said. “We have reform efforts in Italy. … Those are important signals. We have a new course, directed toward business, in France — that is good news. But we have also wasted a lot of time, and time is pressing.”

The ECB acted after months of excessively low inflation in the eurozone had discouraged borrowing and spending and kept the economy at risk of recession. The fate of the eurozone is vital for the global economy in part because Europe is a major trade partner for the United States, Britain, Eastern Europe, and Asia.

The Fed completed the last of three bond buying programs late last year. The Bank of England and the Bank of Japan have also done bond purchases.

Draghi and the ECB governing council made a key concession to critics of massive government bond purchases: They said the risk of any losses would stay with national central banks for 80 percent of the bonds bought.

Draghi has faced opposition from two German members on the governing council. German Bundesbank head Jens Weidmann had argued that bond purchases could stick German taxpayers with losses in case of default. And he complained that the new stimulus would take pressure off governments, such as those of France and Italy, to ease regulations on hiring and firing and make their economies more business- and growth-friendly.

In Davos, Pier Carlo Padoan, Italy’s minister of economy and finance, said of the ECB’s program: “Families and companies that are now trying to reduce their debts can have more confidence and spend more. Companies can invest more.”

Draghi cautioned that it would be “a big mistake” for euro countries to view the ECB’s bond-buying program as a rationale to increase government spending.

“That would undermine confidence,” he said.

Economists note that government bond yields have already fallen substantially since the depths of the eurozone’s debt crisis in 2012. That means it will be hard to drive bond-market borrowing costs down much more. Banks — the main source of credit for eurozone companies — will get more cash. But any economic pickup depends on whether businesses decide to further borrow and expand.

The eurozone is still working off its government debt crisis. Growth has been sluggish as governments in Italy, Spain, Greece, Portugal and Ireland have had to restrain spending and raise taxes to pare debt. European leaders have warned that the eurozone must end its stagnation to win lasting public approval for the shared currency.