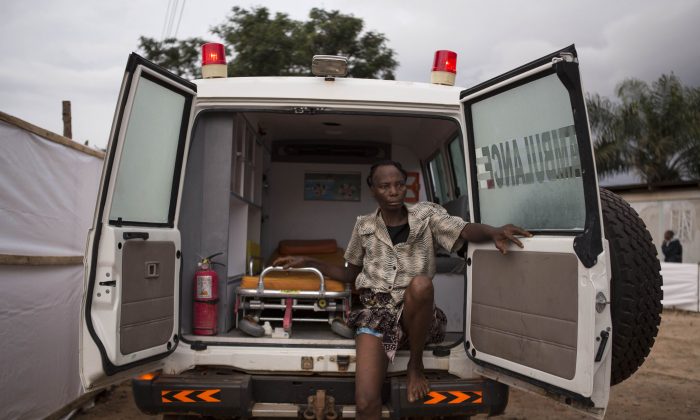 In this photo taken on Wednesday, Sept. 24, 2014, a woman suspected of suffering from the Ebola virus sits in an ambulance in Kenema, Sierra Leone. Sierra Leone restricted travel Thursday, Sept. 25, 2014 in three more "hotspots" of Ebola where more than 1 million people live, meaning about a third of the country's population is now under quarantine. Sierra Leone is one of the hardest hit countries in the Ebola outbreak sweeping West Africa that is believed to have killed more than 2,900 people, according to World Health Organization tolls published Thursday. (AP Photo/ Tanya Bindra)
Africa

Villagers in Liberia are fearful that the Ebola outbreak in West Africa has caused two patients to “rise from the dead,” reports say.

Two women–in their 60s and 40s–died from Ebola in Nimba County, Liberia. Later, the local New Dawn paper claimed that the two were resurrected and are now alive, reported the Mirror.

The victims were identified as Dorris Quoi of Hope Village Community and Ma Kebeh.

They were being taken for burial when they apparently rose from the dead, the Mirror states.

On Twitter, users were making comments about “Ebola zombies.”

The World Health Organization said that 2,917 people have died from the deadly virus this year. “The situation in Guinea, although still of grave concern, appears to have stabilized,” the organization said, via the New York Times.

According to The Guardian, neighboring Sierra Leone has quarantined nearly 1 million people.

Sierra Leone’s country director, Kelfa Kargbo, was quoted as saying: “We need more help from the World Food Programme, but more than that we need a distribution network to be built to make sure the food gets in and gets in regularly to the starving people. I am expecting starvation to show in three or four weeks unless this is addressed.”

“We were not prepare for the quarantine overnight. The areas being quarantined are really poor communities, most people live on 50p a day,” he added.