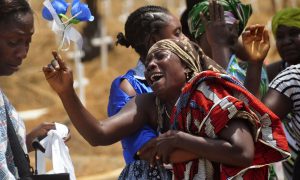 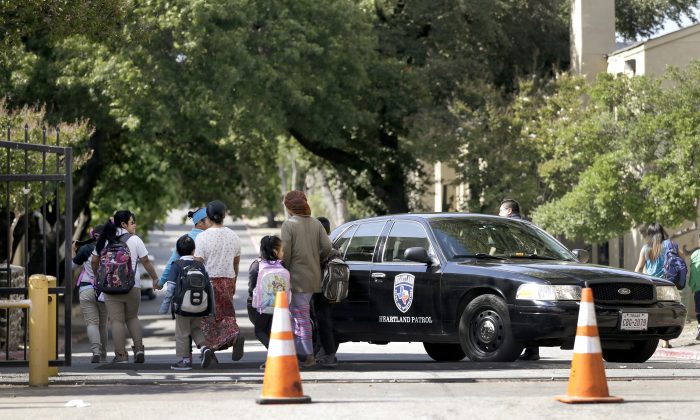 Families walk by a law enforcement vehicle near the main entrance to The Ivy Apartments as children return from school, Wednesday, Oct. 1, 2014, in Dallas. The man diagnosed with having the Ebola virus was staying at the complex with family and is now hospitalized. (AP Photo/Tony Gutierrez)
Ebola

Ebola in US: Who Else Was Infected?

The first Ebola patient diagnosed in the U.S. initially went to a Dallas emergency room last week but was sent home, despite telling a nurse that he had been in disease-ravaged West Africa, the hospital acknowledged Wednesday.

The decision by Texas Health Presbyterian Hospital to release him could have put many others at risk of exposure to the disease before he went back to the ER two days later, after his condition worsened.

Thomas Eric Duncan explained to a nurse Friday that he was visiting the U.S. from Liberia, but that information was not widely shared, said Dr. Mark Lester, who works for the hospital’s parent company.

Instead, the patient was sent home with antibiotics, according to his sister, Mai Wureh, who identified her brother as the infected man. Antibiotics, which target bacteria, are generally ineffective against Ebola, which is caused by a virus.

A day after the man’s diagnosis was confirmed, a nine-member team of federal health officials was tracking anyone who had close contact with him.

The team from the Centers for Disease Control and Prevention was in Dallas to work with local and state health agencies to ensure that those people are watched every day for 21 days.

Anyone who came into contact with Dallas Ebola patient Duncan should be concerned, according to Dr. Bill Miller, who is a physician for over 30 years.

“The moment they begin to feel ill, they should seek care and be prepared to be quarantined.” Miller said he is horrified that America is allowing travel from the hot zone in Western Africa, and at the miscommunication inside the hospital.

Texas Governor Rick Perry said in a Wednesday press conference, “The disease cannot be transmitted before having symptoms,” and that Texas is well prepared to handle it, because it is one of only 13 states certified by the CDC to do diagnostics for Ebola.

While it’s accurate that a person is not able to transmit Ebola before symptoms begin, there is a caveat. It’s more of a sliding scale than an on-off switch. A person is beginning to fall ill, and the viral load is increasing inside his body. Somewhere between day two and day 20, the person becomes able to transmit an illness.

CDC Director Dr. Tom Frieden has sought to reassure a skeptical public. “While it is not impossible that there could be additional cases associated with this patient in the coming weeks, I have no doubt that we will contain this,” he said in a CDC announcement on Tuesday.

Officials are monitoring 12 to 18 people who may have been exposed to the man, including three members of the ambulance crew that transported him to the hospital and five schoolchildren.

Some of the people are members of his family, but not all, Dallas city spokeswoman Sana Syed said.

The ambulance crew tested negative for the virus and was restricted to home while their conditions are observed. The children, who attend four separate schools, apparently had contact with the man over the weekend and then returned to classes this week. But school officials have said they showed no symptoms.

Duncan has been kept in isolation at the hospital since Sunday. He was listed in serious but stable condition.

Ebola is believed to have sickened more than 6,500 people in West Africa, and more than 3,000 deaths have been linked to the disease, according to the World Health Organization.

Ebola symptoms can include fever, muscle pain, vomiting and bleeding, and can appear as long as 21 days after exposure to the virus. The disease is not contagious until symptoms begin, and it takes close contact with bodily fluids to spread.