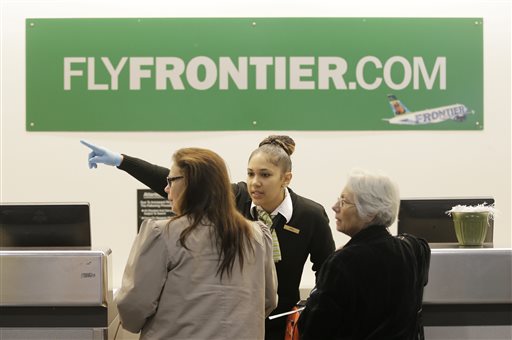 A Frontier Airlines employee wears rubber gloves as she directs passengers where to go at Cleveland Hopkins International Airport Wednesday, Oct. 15, 2014, in Cleveland. Ohio health officials aren't sure how many people came into contact with a Texas nurse as she visited family in the Akron area days before being diagnosed with Ebola in Dallas. The Ohio Department of Health says she visited family from Oct. 8-13 and flew Monday from Cleveland to Dallas. (AP Photo/Tony Dejak)
US

The second nurse confirmed with Ebola was visiting family members in the Akron, Ohio area just days before being diagnosed with the virus in Dallas.

State health officials aren’t sure how many people came into contact with Amber Vinson when she was in and around Akron.

The 29-year-old was in the area to prepare for her wedding, according to Toinette Parrilla, the director of public health in Cleveland.

Parilla said that there’s no current confirmed Ebola cases in Cleveland at this time. Vinson and fellow nurse Nina Pham are the only confirmed cases in the United States as of yet. Vinson was being transported from a Dallas hospital to the University of Emory on Wednesday so that officials could provide her with better case.

The Ohio Department of Health says Vinson visited family from October 8 through October 13 before flying Monday from Cleveland to Dallas.

The state epidemiologist Dr. Mary DiOrio says Ohio and Summit County health officials are working to identify and alert people who may have been in close contact with the woman and implement quarantines if necessary.

She says information is being gathered about whether the nurse showed symptoms while in Ohio. Ebola is spread through direct contact with the blood or body fluids of someone with the virus.

She says local health departments will be kept apprised of the situation.

A university statement says the woman stayed with her family in Summit County but didn’t visit the Kent State campus. The school has asked those three employees to remain off campus for three weeks.

Vinson was visiting family members in Tallmadge, the broadcaster said. One of her relatives is under self-quarantine.

Officials are still deciding what to do with the home that Vinson stayed in while visiting Ohio. Mayor David Kline said that he believes Vinson’s parents live in Tallmadge, reported the Tallmadge Express, but he doesn’t know the exact location of their home.