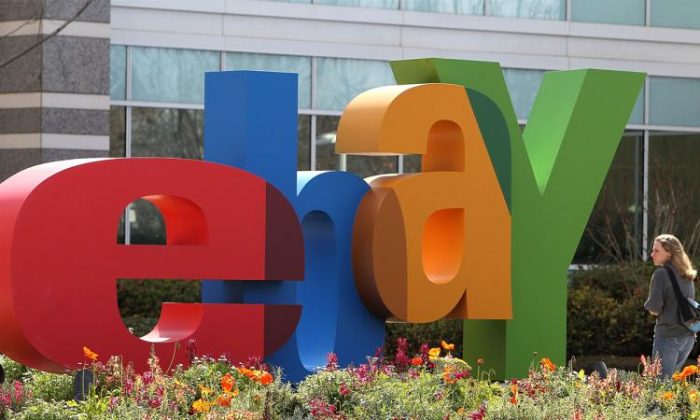 The eBay logo at the company's headquarters in San Jose, Calif., on Feb. 24, 2010. (Justin Sullivan/Getty Images)
US News

The online marketplace eBay has decided to pull six books authored by Dr. Seuss from its platform.

An eBay spokesperson told the Washington Examiner on Thursday that they are reviewing all their listings to remove the books.

“At eBay, we have a strict policy against hate and discrimination to ensure our platform remains a safe, trusted and inclusive environment for our global community of buyers and sellers,” Parmita Choudhury, eBay Corporate Communications Specialist told the news outlet. “We’re currently sweeping our marketplace to remove these items. It can take some time to review all existing listings and provide education to impacted users. We’re also monitoring the newly published list to be reviewed.”

It comes after Dr. Seuss enterprises released a statement on Tuesday, on the author Theodor Seuss Geisel’s birthday, saying that they would cease publication and licensing of six books because they “portray people in ways that are hurtful and wrong.”

“Ceasing sales of these books is only part of our commitment and our broader plan to ensure Dr. Seuss Enterprises’s catalog represents and supports all communities and families,” the statement reads.

The targeted books are “And to Think That I Saw It on Mulberry Street,” “If I Ran the Zoo,” “McElligot’s Pool,” “On Beyond Zebra!,” “Scrambled Eggs Super!,” and “The Cat’s Quizzer.”

Following the announcement, some people began selling their copies for hundreds of dollars on Amazon and eBay.

Clare Ath, a Ph.D. student at Liberty University, was among those selling her copy of a Dr. Seuss book on eBay. On Twitter, she wrote that the online marketplace had removed her listing.

“You can’t make this stuff up,” she wrote. “@EBay is blocking my listing of @Dr. Seuss’s ‘The Cat’s Quizzer’ & citing it as offensive material. Yet anti-Semite Louis Farrakhan’s books are okay?” Ath said, adding a “cancel culture” hashtag at the end of her tweet.

In one of the removed titles, “And to Think That I Saw It on Mulberry Street,” an Asian person is portrayed wearing a conical hat, holding chopsticks, and eating from a bowl. “If I Ran the Zoo” includes of two bare-footed African men wearing what appear to be grass skirts with their hair tied above their heads.

Dr. Seuss’s books continue to be popular, earning $33 million before taxes in 2020, with Geisel ranking only behind Michael Jackson on the “highest-paid dead celebrities of 2020,” as classified by Forbes.