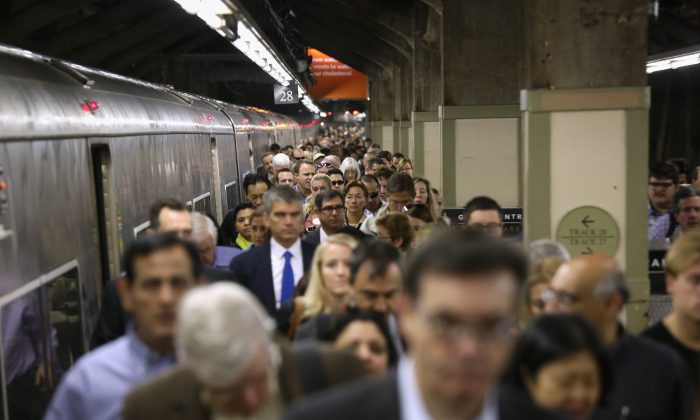 Eavesdropping on a Train

NEW YORK—The two friends sat in front of me on the Hudson Line. All I could see was their two topknots, their brown and black hair upswept into round buns.

It was like a two-person play, veering from minor-key comedy to sadness. Snippets painted a portrait of a workplace, and of troublesome people in it: “So she is too good to go get a medical chart herself? She spends all day on the Internet, on the phone with her family. This is medical billing? Then she swoops in and messes with the front desk, it’s too crazy.”

Then they would switch to murmuring, rapid Spanish.

Black: “It really hurt me when he said ‘I’m sorry about your dog’ and that was that. Done. The subject is over. It was so cold. My mind keeps going back to that.”

Brown: “Did you feel he was mocking?”

Black: “No, but more like it’s just something you have to say, but it was clear he did not really care.”

Brown: “You have to give of yourself. It has to be sincere.”

Brown was right. False empathy is worse than no empathy at all. And good leaders have to care. If a worker sees a boss who slacks off, and who does not seem concerned about the worker, it’s a lonely feeling.

From the battlefield to the medical billing office, people need to feel that they are cared for. Eugene Sledge wrote, “With the Old Breed: At Peleliu and Okinawa,” a memoir of his combat service with the Marine Corps in the Pacific during World War II.

Sledge came to love his company’s commanding officer. He loved him because he would come and talk to individual men, asking where they were from, asking about their families, making wistful jokes, showing genuine interest in them as human beings.

Marine drill instructors call recruits “my bunnies,” behind their backs.

A Marine officer who is true to the tradition is selfless and devoted to those he leads.

In the military, in school, the NGO, the newsroom, or the bank, we social creatures need the same thing; we need to belong.

When Brown and Black switched back to English, Brown turned the thing around. She was telling Black to offer compassion to her cold, awkward boss, and not judge the lazy, interfering medical biller too harshly.

She reworked the ‘give of yourself’ idea. She was advising her friend to soften her heart toward those people who left her feeling wronged and excluded.

When the train arrived at Grand Central, we got off together, and the two embraced on the platform. Both were young and plump, dressed for work. Brown smiled a radiant smile. I looked at Black and thought, “You are luckier than you know, to have such a person for a friend.”