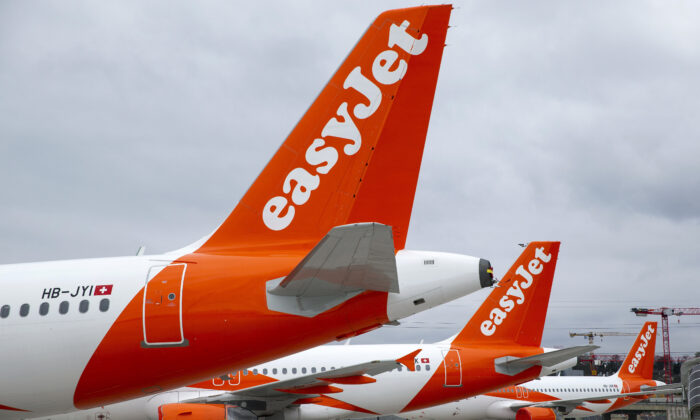 A large number of easyJet aircraft parked on the tarmac of the Geneve Aeroport, in Geneva, Switzerland, on March 30, 2020. (Salvatore Di Nolfi/Keystone via AP)
Companies

British airliner easyJet has said it plans to remove seats in some of its planes this summer so that it can fly with fewer crew members amid staff shortages.

In a statement to Business Traveller, the airline said the move was an “effective way of operating our fleet while building additional resilience and flexibility into our operation this summer where we expect to be back to near 2019 levels of flying.” Prior to the pandemic, easyJet flew nearly 300,000 passengers daily during peak season.

The airline will be operating its UK A319 fleet with a maximum of 150 passengers onboard and three crew, in line with the Civil Aviation Authority’s (CAA) regulations. Easyjet’s A319s are normally fitted with 156 seats.

CAA regulations state that airlines must provide one member of cabin crew for every 50 seats as opposed to passengers, meaning that easyJet would still meet that requirement.

EasyJet’s larger A320neo and A321neo aircraft, which can fit between 186 and 235 seats respectively, will not be affected by the decision, the company said.

The Epoch Times has contacted an easyJet spokesperson for comment.

EasyJet’s decision comes as the aviation industry has been hit with a wave of staff shortages amid the COVID-19 pandemic followed by a surge in demand for flying as nations across the globe dropped or eased travel restrictions. The UK government removed international travel restrictions at the start of this year.

In the run-up to the Easter holidays, both easyJet and British Airways were forced to cancel hundreds of flights amid a surge in virus cases which prompted staff shortages.

At the time, easyJet chief executive Johan Lundgren apologized for the cancellations, telling Sky News: “We were having in some cases up to 20 percent of absence, and you wouldn’t expect any airline at any point in time to be able to cover that. That is unfortunate for people who have been affected but I would like to reiterate that those cancellations were made preemptively.”

Lundgren also noted that it was “too early to tell” how long the flight disruption will continue and called on the government to speed up the time it takes to vet and give clearance to new crew members.

“There’s this delay of the clearance from the DfT [Department for Transport] for people to get their IDs,” he said. “There’s a backlog there and we’re waiting currently for about 100 cabin crew to get their IDs. There’s a three-week delay on that. That has had an impact. If that would have been on time, we would have seen less cancellations.”

The airline told Business Traveller that the latest decision to remove seats from its A319 fleet was just one of a number of measures it is utilizing to help it cope with staff shortages. It is also looking into placing more resources into processing the accreditation of new staff members.

It noted that the number of seats being removed was “very small” when compared to the number of passengers it gets overall in the summer season.

Last month, easyJet said its summer flight bookings were exceeding pre-pandemic levels, noting that it has received more bookings in the past six weeks up to April 12 than in that same period in 2019.