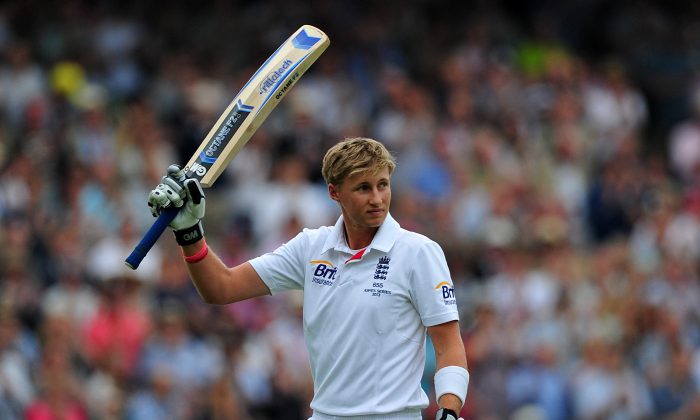 Man of the Match ... England’s Joe Root acknowledges the crowd after being dismissed on day four of the second Ashes Test match against Australia at Lord’s Cricket Ground. Root scored 180 in the second innings. (CARL COURT/AFP/Getty Images)
International

Easy Win for England Puts Them Two up in Series

Ian Bell and Joe Root with the bat, and Graeme Swann with the ball, destroyed Australia in the second Ashes Test at Lords with over a day to spare. The match, which started on Thursday July 18, was scheduled to run five days, but England wrapped it up early to win by a whopping 347 runs.

England are one win away from winning the 5-Test series. A win, or a draw, and they will retain the coveted Ashes.

To make matters even worse, Australia’s James Pattinson will take no further part in the series as he is suffering a stress fracture of the lower back. Meanwhile, the young Ashton Agar, who made such an impressive start on his Test debut at Trent Bridge, is in doubt for the third Test as he is suffering from a hip injury.

This was Australia’s sixth successive Test defeat by England—a feat not equalled since 1984.

After a first innings of 335—in which Ian Bell scored 109 runs, Jonathan Trott 58 and Jonathan Bairstow 67—England dismissed Australia for just 128, with Graeme Swann taking five wickets for 44 runs.

England were equally impressive in their second innings, scoring 335 for five wickets by close of play on Saturday July 20—the third day of the match. In this second innings Ian Bell scored 74 runs and Joe Root was on 178 not out. At this stage England had a lead of 568 runs.

On day 4 England continued their 2nd innings allowing Root the opportunity to reach his double century. But this was not to be as wickets fell quickly.

Bairstow was caught by Brad Haddin off a Ryan Harris ball in the third over of the day. In the next over, the new batsman Matt Prior immediately offered an easy return catch to bowler Agar, but he dropped it. Then Root played a badly executed scoop shot off Harris’ first ball of the next over and he was caught by Steven Smith at first slip for 180 runs.

At that point, Alastair Cook, the England captain, declared at 349 for seven wickets—a lead of 582.

In his opening spell Anderson trapped Watson lbw when the score was on 24—making it the Australian’s third consecutive lbw dismissal this series.

Watson’s opening partner, Chris Rogers was the next to go, misjudging a ball from Graeme Swann in Swann’s first over of the innings, which took his off stump when the score was 32. Rogers had just 6 runs.

A third wicket fell when the score was on 38, when Hughes pushed forward to a ball from Swann and was out lbw for 1 run.

Usman Khawaja and Michael Clarke then took the total to 123, before Clarke (Australia’s captain) was caught by Cook off a Root ball for 51 runs. Khawaja was the next to go caught by James Anderson off the bowling of Root, making the score 135 for 5 wickets and Australia were in deep trouble.

Smith went for 1 run, Agar made 16, Haddin made 7. Peter Siddle and James Pattinson took the score from 162 for eight to 192. Then Siddle was bowled by Anderson for 18 and the last wicket took the score to 235 when Pattinson was out lbw to Swann.

Questions arise as to reasons behind Australia’s batting collapse.

Some argue that they are not 5-day Test match hardened players, with an emphasis on individuals scoring as many runs as possible in 5 to 10 overs, as opposed to having experience building an innings with the bat over 1 or 2 days.

The argument follows that the Twenty 20 cricket format—and particularly the summertime Big Bash League with its city-based franchises—is the key factor in the inability of Australian batsmen to cope in Test matches.

Test cricket is considered to be the purest form of the game and the tradition is fading there. Australia’s State cricket national competition, which includes the longer formats and is the traditional pathway for Australian cricketers, has taken a back-seat to T20 leading to the batting break-down.

Others argue that the once-mighty Australia simply aren’t good enough.

Regardless, the way Australia are playing they may have already missed their best, and only, chance to win a Test this tour—when they lost by 14 runs in the first Test match of the 2013 Ashes series at Trent Bridge Cricket Ground a fortnight ago (ending on Sunday July 14).

Appearing to be in a spiralling meltdown, the tourists have a chance to re-group when they play a 3-day match against Sussex at Hove starting this coming Friday (July 26).

For England, complacency will be a factor to avoid, but this is hardly expected to be too much of a problem for these professional cricketers.

The temptation may be there for the Australian’s to come out hot and firing in the hope of saving the series and regaining the Ashes. However cool heads—for both teams—will be needed to win the third Test at Old Trafford, Manchester, which starts on Thursday Aug 1.