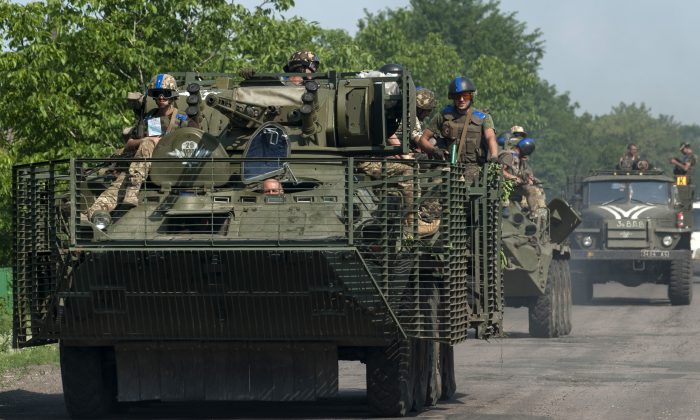 DONETSK, Ukraine — Separatist and government troops in east Ukraine stood nervously poised hundreds of meters apart Thursday in the wake of bloody battle that has threatened to demolish what remains of the brittle cease-fire there.

Underscoring anxieties in the Ukrainian capital, President Petro Poroshenko warned of a possible large-scale offensive by separatist forces following the violence on the western fringe of the rebel citadel, Donetsk.

But the mood among rebel combatants huddled in a wooded base just beyond the Donetsk suburb of Marinka, where Wednesday’s fighting was centered, suggested only frustration at the lack of a clear battle plan.

“We can’t just sit here in trenches. I think we should only go forward, forward and forward,” one separatist fighter, who identified himself by his nom de guerre Abaza, told The Associated Press.

In the dug-out where Abaza stood, flies clustered over a pool of blood where a wounded militiaman was given emergency treatment the day before.

Rebels in Donetsk now appear to be standing down following the clash.

An AP reporter who visited Marinka briefly Thursday observed that it appeared to be under the control of Ukrainian government troops, who said they were performing mop-up operations.

Even the official tally of fighters killed attests to the battle for Marinka being the biggest that east Ukraine has seen since February, when an internationally brokered armistice was signed.

Ukraine says five of its servicemen died in combat Wednesday, four of them in or around Marinka. Eduard Basurin, a separatist spokesman, said 14 rebel fighters and five civilians were killed by Ukrainian fire during the day, but provided no details.

The task of monitoring what is looking like an increasingly hollow cease-fire lies with a mission of the Organization for Security and Cooperation Europe. A special report hastily compiled by the OSCE after Wednesday’s fighting strongly suggests the violence was the result of a rebel initiative.

Observers saw at least multiple armored vehicles moving west through Donetsk on the eve of the battle. OSCE reported hearing around 100 outgoing artillery rounds fired at daybreak from a location within separatist-held territory. More heavy fire followed throughout the day.

Rebels are sticking to their story, however, and insist they were acting solely in defense against a Ukrainian assault. Their foray into Marinka and their temporary capture of several buildings, including the local hospital, was merely a counterattack, they said.

“We pushed them as far as we could, then we held our positions, then we retreated,” said a rebel commander, who identified himself by the call-sign Dikiy. “There was a violent fight, a heavy fight, from 5 a.m. to 5 p.m.”

Bociurkiw also told reporters that observers in recent days had found that some heavy weapons which had been pulled back by both sides were missing from the areas where they were being stored.

“This suggests non-compliance” with the cease-fire accord, which requires both sides to pull back large weapons in order to create a buffer zone, Bociurkiw said.

An Associated Press reporter on Thursday saw two Grad missile launchers driving toward the government-controlled town of Artemivsk. Under the cease-fire accord, such weapons were to be withdrawn from that area.

The Ukrainian military freely admits that it used heavy arms in its effort to retain Marinka, but said it was left with no choice.

A part of their firepower landed a direct strike on the base from which rebel infantry mounted their offensive. The converted stables set in a copse just within the limits of Donetsk were still smoldering Thursday afternoon.

Several of the fighters — many among them from Russia — complained wearily that their travel documents were among the personal possessions consumed in the blaze.

Russia has strongly denied sending weapons or troops to back the rebels, despite a broad array of evidence indicating otherwise.

Asked if President Vladimir Putin could again seek the parliament’s permission for using Russian troops abroad as he did early in the Ukrainian crisis, his spokesman, Dmitry Peskov, said Putin has the right, but emphasized the need to fulfill the cease-fire agreement and avoid steps aimed at escalation of tensions.

Despite fears of a possible full-blown resumption of combat, offensives reverted Thursday to the sporadic shelling that has become a hallmark of the Ukrainian conflict, which has claimed more than 6,400 lives since April 2014.

Vyacheslav Abroskin, the police chief for the government-controlled part of the Donetsk region, said in a Facebook statement that rebels shelled the town of Avdiivka just north of the city of Donetsk. He said an unspecified number of civilians were wounded.

The violence has elicited an international chorus of concern. While Moscow pins the blame on Ukraine, the West has been united in its criticism of the rebels and, by extension, Russia.

“This escalation followed the movement of a large amount of heavy weapons towards the contact line by the Russia-backed separatists,” EU spokeswoman Maja Kocijancic. “Renewed intense fighting risks unleashing a new spiral of violence and human suffering.”

The U.N. Security Council scheduled an open meeting Friday morning on the latest developments at the request of Lithuania, a strong supporter of the Ukrainian government.