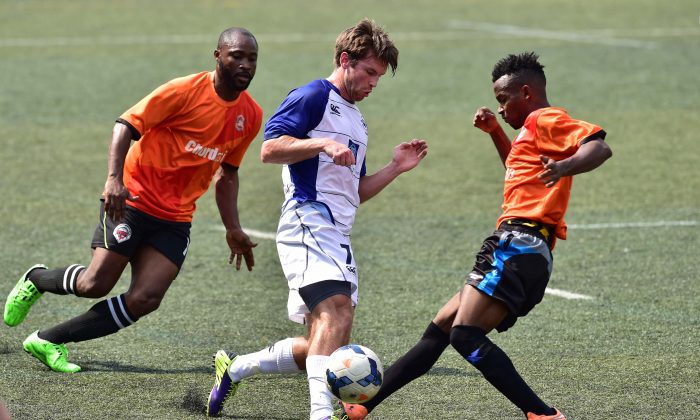 Football action in an early season match between Albion and Corinthians in the HKFA first division at Sports Road on Oct 18, 2015. (Bill Cox/Epoch Times)
HK Football

HKFA Premier League season concluded at the weekend May 7-8 with Kitchee 2-nil victors over Eastern, Yuen Long 2-nil winners over Dreams metro Gallery, BC Rangers winning 3-2 against Hong Kong Pegasus, and South China beating Kwoon Chung Southern 3-2. Eastern had already claimed the championship, with BC Rangers edging Glory Sky Wong Tai Sin at the bottom, leaving the latter to hold up the division.

Tai Po lead the table with 59 points to claim the championship, with HKFC 2nd with 56 points, and Sun Hei 3rdwith 55 points all from 25 games. HKFC and Sun Hei play the decider as to which occupies second place. Lucky Mile are likely to end the season at the bottom of the division.

Tung Sing are champions on 51 points with eastern District second with 49 points.

Central & Western lead the table with 78 points from 29 matches, with Hoi King second with 75 points from 28 games, the only outstanding item being the championship between the 2.

The league rounds are now completed with just the Cup Final and Chairman’s Cup Final to be decided.