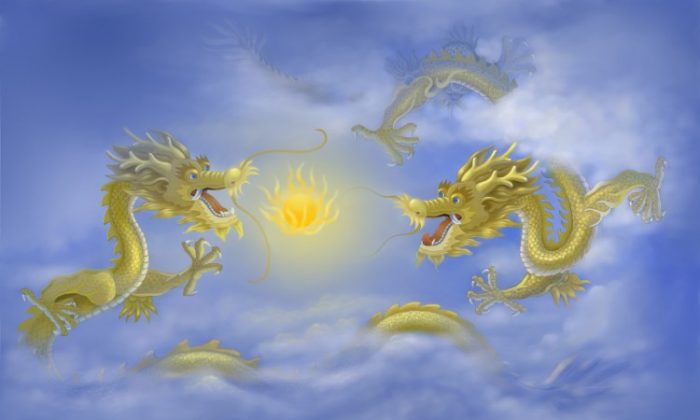 Dragons in the East have a positive connotation and are said to have accompanied several great emperors in the third millennium B.C. when they descended from heaven and, after completing their mission, ascended back to heaven. (SM Yang/The Epoch Times)
China

Jan. 23 marks this year’s Chinese New Year. After a Rabbit year, the upcoming year stands under the sign of the Dragon. Unlike Western dragons, in the Chinese tradition, dragons have a good reputation.

Despite their complicated features, dragons have been popularly depicted in more or less the same way in temples, palaces, books, paintings, and sculptures throughout history. The ancient Chinese revered the dragon so much that it became the only celestial creature in the Chinese zodiac.

Although the dragon was often associated with mythical realms, according to Chinese historical records, dragons had appeared on earth from time to time. The oldest record of a dragon arguably dates back to Fu Xi, the creator of Chinese civilization, who was believed to be half-human and half-dragon.

According to legends, dragons would appear in the sky on the dates of the birth or death of historic Chinese figures such as the Yellow Emperor (circa 2600 B.C.), Emperor Yao (circa 2300 B.C.), Emperor Shun (circa 2200 B.C.), and Yu the Great (circa 2100 B.C.), serving as the embodiment of the great sage emperors.

It was said that the Yellow Emperor made a big Ding (an ancient tripod with two loop handles, used to worship heaven) at the foot of Qiao Mountain, Guangdong Province, in 2598 B.C. When it was set up, the gate of heaven opened and a yellow dragon came down. The Yellow Emperor ascended to heaven with 70 of his chancellors by riding the yellow dragon.

In some other legends, Eastern dragons were depicted as creatures with magical powers that could assist emperors in suppressing revolts in wartime. Over time, people came to interpret the appearance of dragons in the sky as an indication that something important would soon happen or as a sign of good fortune.

Read the amazing Tang Dynasty story:
The Rescue of the Dragon Princess