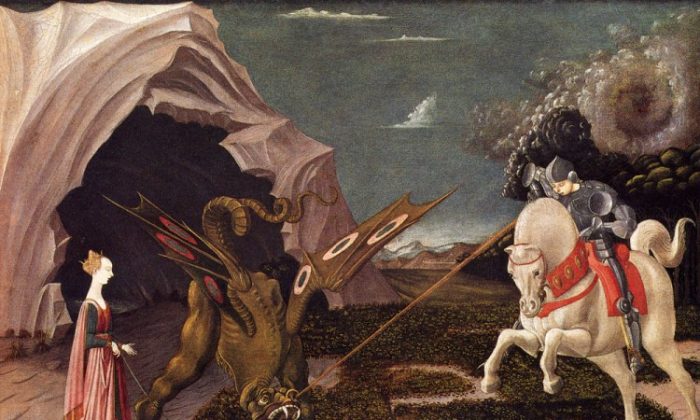 In China, as well as in South Asia, the dragon is commonly the symbol of nobility, solemnness, holiness, and good fortune. (Jane Ku/The Epoch Times)
China

In both the East and the West, the dragon is often associated with fantasy and mythical realms. Yet the outer appearances and common perceptions of the dragon differ greatly in these two parts of the world.

In China, as well as in South Asia, the dragon is commonly the symbol of nobility, solemnness, holiness, and good fortune. Throughout the history of China, Korea, and Japan, the dragon (or the concept of the dragon) has been a part of people’s daily lives. The dragon has existed wherever Chinese culture existed, and the Chinese eventually began calling themselves the descendants of the dragon.

Despite the differences between the Eastern and Western dragons, they are both intimately connected to people’s beliefs.

The Eastern dragon is portrayed as an auspicious creature with magical power that coexists in heaven with gods. When Buddhists or Taoists achieve perfection, they ascend to heaven by riding an Eastern dragon.

In Western culture, the dragon represents evil and darkness. Unlike the celestial image of the Eastern dragon, the Western dragon has sharp teeth and strong legs. It is said to bring harm, suffering, and fear to human beings.

The Book of Revelation, the last book of the New Testament, speaks about the devil, Satan, taking the form of a red dragon and fighting Archangel Michael. Satan, the deceiver of the world, was defeated and cast to the earth.