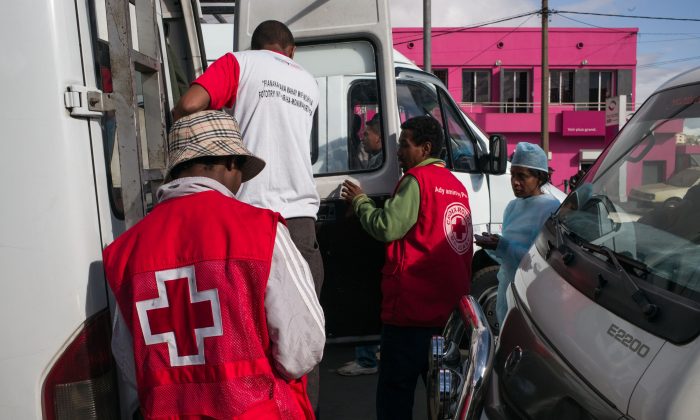 Doctors and nurses from The Ministry of Health and officers of the Malagasy Red Cross staff a healthcare checkpoint in the Ampasapito district in Antananarivo, Madagascar, on Oct. 5, 2017. (RIJASOLO/AFP/Getty Images)
Africa

At least 143 died and almost 2,000 have been infected by the plague outbreak in Madagascar that now threatens to spread to mainland Africa, VOA reports.

Ten African nations have been put on alert by the World Health Organization (WHO) that they could also face an outbreak: South Africa, Mauritius, Seychelles, Tanzania, La Réunion, Mozambique, Kenya, Ethiopia, Comoros, and Malawi.

“We have infection prevention materials ready and groups and teams ready to be activated if there is a trigger,” said Dr. Dan Namarika, principal secretary in the Malawi ministry of health, according to the Daily Mail.

The World Health Organization predicts it could take half a year to extinguish the outbreak. It has pledged $5 million for extra medical personnel, disinfecting buildings, and fuel for ambulances.

The pneumonic plague can be treated with antibiotics, but needs to be caught within the first 24 hours. Otherwise it could be deadly.

The pneumonic plague can be contracted inhaling respiratory droplets after close contact with animals or humans, and is the only plague that can be spread between humans, the CDC says.

It’s not clear how the outbreak started. Rats and the fleas that feed on them in Madagascar have always carried the Yersinia pestis bacteria, which causes the bubonic plague. But there’s usually about 600 cases a year on the island.

The recent outbreak has been the worst in at least 50 years, according to Jimmy Whitworth, professor of International Public Health at the London School of Hygiene and Tropical Medicine, according to the Daily Mail.

One theory is that more frequent forest fires have driven rats and their fleas out of the woods and into human settlements, where they infect humans.

Another theory is that the ritual that some have in Madagascar of exhuming bodies of loved ones and dancing with them has also caused the plague to spread.