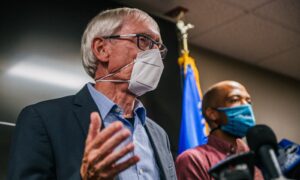 Some 30,000 children and their parents from all 50 states and the District of Columbia joined the first family in the White House backyard for the annual Easter Egg Roll, with an Easter egg hunt, live music, storytelling, sports, a visit from the Easter Bunny, and healthy cooking demonstrations.

“I hope all of you had a wonderful Easter,” President Barack Obama said on the South Lawn Monday morning. “I hope everybody is having a great time here.”

“We are so excited about this year’s Easter Egg Roll,” said the first lady. “The theme is Get up and Go, because as you know, I’m a big proponent of getting up and going, making sure we’re moving and eating healthy.”

“And this Easter Egg Roll reflects all of that, so while you’re here in addition to listening to some great music and dancing a little bit, you can roll your eggs. You can do some yoga." She invited their guests to do yoga, try an obstacle course, and play basketball or tennis.

The first egg roll was held by Dolley Madison, the wife of President James Madison, on the grounds of the Capitol in 1814. More than half a century later, President Rutherford B. Hayes adopted the celebration on the South Lawn in 1878 at the request of a number of children, including his own.