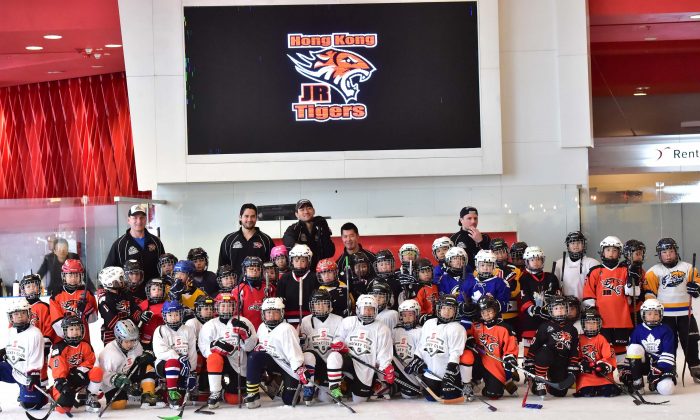 A group of Junior Tigers at the 2017 Easter Camp at Elements Hong Kong together with head instructor Brad Smyth (Back Row L) and his assistant instructors. (Eddie So)
HK Ice Hockey

HONG KONG—With 40 screaming children of various ages ranging from 10 to their mid-teens, slithering around on blades of steel, one could be forgiven for thinking they were entering an arena of madness.

However, hold that thought, as the madness is actually shouts of glee and joy as the children in attendance are part of an Easter camp with former NHL winger Brad Smyth. Brad heads the coaching academy of NHL Alumni Camps and Clinics and runs camps for the Hong Kong Junior Tigers which includes players of both genders playing in U10, U14 and U20 age groups, completing drills under the personal eye of Smyth.

Smyth started learning his skills as young as five and why not, with a pond near his home to get him started with brother Gregory. Gregory who heads the CIHL league in Hong Kong is also part of the playing and coaching group.

“I started playing in junior hockey and from there, that was all I could think about,” said the 44-year-old Ottawa-born Smyth, who has played for five different clubs at home and overseas teams.

But it’s his temporary presence here that intrigues him more with his brother Gregory where they are bidding to develop the sport and planning for it to gain wider appeal in HK and China.

Gregory took the point further when he explained their main projection was to bring the culture the two brothers learned as ‘kids’, for kids to have fun while learning to play the sport to reach their true potential.

“Kids are having fun and are creative while the feedback from the parents has been phenomenal and they have been very supportive,” Gregory said.

Brad went a step further and explained that he had got to know many of the children well in the past three years that he has travelled here to coach them.

“I’ve seen a vast improvement in many of the children and I can only see it getting better,” he said.

Gregory echoed his sibling’s sentiments; “it will take a generation or two before the idea of playing on the ice is fun and to change the issue, as the sport lacks the sport facilities here,” he said, citing the full size rink in Mega Box and smaller rinks in Tai Koo Shing and Elements.

“With a population of nearly 8 million we have just a few rinks here to share around. In Vancouver alone, where the population is around 4 million there are about 200 rinks, but we are still working at it,” he said.

With figure skating also coming on-line in Hong Kong it is hoped that the sport will get better coverage and exposure, not just in Hong Kong but around the region.

The Hong Kong Tigers will have another camp in September with organizers looking for even more participation and preferably more sponsorship for their programs.