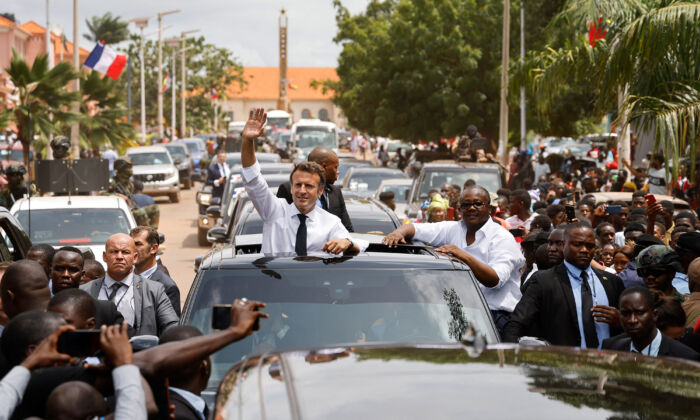 French president Emmanuel Macron and Guinea-Bissau's president Umaro Sissoco Embalo (R) wave to the crowd through the roof of a car in Bissau, on July 28, 2022. (Ludovic Marin/AFP via Getty Images)
World

France, Russia and the United States are racing against time to redefine their increasingly unpredictable relations with African states amid the war in Eastern Europe.

President Emmanuel Macron of France visited Cameroon, Benin, and Guinea-Bissau, from July 25 to 28 and addressed Africa’s multifaceted security challenges as well as Russia’s invasion of Ukraine.

“France remains resolutely committed to the security of the continent, acting in support, and at the request, of our African partners,” Macron told a gathering of French expatriates in Cameroon’s capital Yaounde.

“The choice that has been made by the Europeans, first of all, is not to participate in this war but to recognize it and name it. But I see hypocrisy too often, especially on the African continent,” he said.

The French presidency said the choice of the three countries visited reflects both a desire for “continuity in terms of substance” and deepening partnerships.

But some critics think Macron’s visit to Africa is too little, too late.

“The 21st century of Africa politicians is no longer receptive to a unipolar Francafrique order—partnership with other powerful nations based on mutual interest is now a favoured tactic—France can no longer play God in its former colonies,” according to David Otto, director of counterterrorism for the Geneva Centre of African Security and Strategic Studies.

Otto said the fact that the visit is happening at a time when anti-French sentiments are increasing in Africa—particularly in central and west Africa where France has a majority of former colonies—makes it a purely tactical one.

“France was hoping to use Cameroon, Benin and Guinea to show that Elysee still has reliable allies in the continent after Central Africa Republic, Mali, and to some extent, Burkina Faso, are showing their backs to Paris,” he told The Epoch Times in a text.

“Beyond the diplomatic fanfare, the carefully selected countries did not give France a soft impact landing.”

But a professor of public and international law in Cameroon’s University of Buea, Wilson Tamfu, foresees France winning in her relationships.

“For the first time in 14 years, France took over the presidency of the EU Council in January 2022. This link of France to the EU—the biggest and most influential Regional Economic Community in the world—is a great influence for Africa,” he said.

“This position empowers her in the realm of Franco-African relationships since many African states have bilateral agreements with the EU.”

The same week Macron was touring countries in west-central Africa, the Russian foreign minister Sergey Lavrov jetted from Egypt to the Republic of Congo, Uganda, and Ethiopia.

The French leader promised his country will assist African countries to face the shocks caused by the war in Ukraine by encouraging local investments in agriculture to increase food production.

He said European economic sanctions on Russia that are now affecting Africa are intended to stop Russia’s attack on Ukraine’s sovereignty “and not to punish Africans.”

“We are being attacked by certain people who maintain that European sanctions [against Russia] are the cause of the world food crisis, including in Africa,” Macron lamented.

“This is completely false. It’s just that food, like energy, have become Russian weapons of war,” he said.

But the Russian foreign minister insisted at a press conference in Cairo, Egypt, on July 24 that there’s “a common understanding of the causes of the grain crisis.”

Tamfu said it is “contradictory” for a Russian minister of foreign affairs soliciting friendly ties around the world in times of war.

“In global democracy, the majority of civilized nations are against Putin’s actions in Ukraine,” he told The Epoch Times.

“The French president’s addressing the hypocrisy of African states is justified by the fact that Russia is seeking renewal of ties in times of war.

“Why does Russia not do this at another time? It’s like ignoring a global problem and taking advantage of it to improve bilateral interests with Russia.”

Be it Cameroon, Benin, or Guinea Bissau, Macron’s pledge for military support to help fight extremism in West and Central Africa was constant.

But surprisingly, he avoided mentioning the six-year-old Cameroon Anglophone crisis that threatens stability in the country and in the sub-region.

Otto thinks this was both a tactical and deliberate move, intended to shield the European nation from sensitive topics that will draw it into the internal political affairs of its former colonies.

“France has often been accused of meddling in the internal affairs of its former colonies,” Otto told The Epoch Times.

“At a time when French rejection sentiments are high, the last button for Paris to press is anything to do with what Cameroon considers as purely internal affairs.

“Either way, Paris is in trouble for either staying out of the subject or engaging in the subject of the so-called Anglophone crisis,” he said.

Another visit to Africa by a Western senior figure is when U.S. Secretary of State Anthony Blinken goes to South Africa, the Democratic Republic of Congo, and Rwanda, between August 7–11.

That is an indication Africa remains the go-to continent for the superpowers to gain diplomatic and political leverage—be it France, the United States, Russia, or China, according to Otto.

“We are in the era of the re-scramble for Africa 2.0 but this time, African nations are sitting on the geopolitical table and some are even calling the shots in their national interest,” he wrote to The Epoch Times.

“Increasingly, Africa is getting bolder and choosing who to do what kind of business with.”

“The old Western colonial system of ‘do what we want and what we say and when we say,’ is far-fetched.

“New and powerful players like Russia and China are providing alternative ways of doing business. It’s the era for Africa to sit up and make the most of this geopolitical struggle,” said Otto.