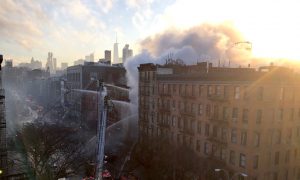 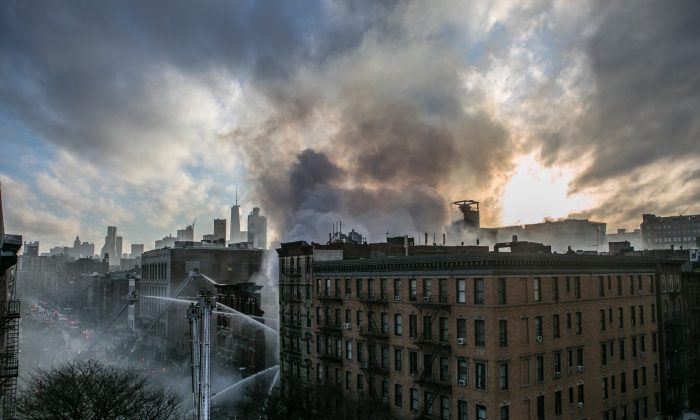 Firefighters on scene in the East Village on March 26, 2015, after a fiery building collapse. About 250 firefighter dealt with the explosion that caused a dozen injuries and the adjacent building to collapse. (Samira Bouaou/Epoch Times)
Crime and Incidents

East Village Building at Center of Explosion Has a Shady History

The East Village building that was the center of a major fire last week had a history of improper gas work, The Associated Press has found.

City officials said a gas leak may be the cause of the explosion that occurred last Thursday and caused three apartment buildings to collapse.

In August, the utility company Con Ed received a report of a gas smell and discovered that the gas pipe to the ground floor sushi restaurant at 121 Second Ave.—where the explosion occurred—was illegally tapped.

Con Ed subsequently shut down gas service to the building for about 10 days, while the building owner made repairs to the pipeline. Con Ed deemed the repairs safe, so it restored gas service, the company said.

On the day of the explosion, Con Ed inspectors had entered the building to check on ongoing work to upgrade gas service.

The building was in the middle of having a bigger gas pipe installed that would serve the entire structure. The existing gas line was intended to serve the sushi restaurant on the ground floor, according to the AP.

Con Ed said that the work did not pass inspection, so its staff locked the new gas line to make sure it would not be used.

Fifteen minutes later, the sushi restaurant owner smelled gas and notified the building owner, who called a general contractor, Dilber Kukic, to the building. He was licensed to do plumbing, flooring, and other work at the 121 Second Ave. building.

Kukic and the restaurant owner’s son went into the basement to check on the pipes, when the explosion happened. Both were burned in the face as a result.

The general contractor was previously indicted for allegedly paying a bribe.

In February, Kukic had been charged with one count of bribery, for paying an undercover city investigator (who posed as a city housing inspector) $600 in cash to dismiss housing code violations at two properties Kukic owned on West 173rd Street in Manhattan.

Through his lawyer, Kukic declined to comment on the explosion. He is scheduled to appear in court for the bribery charge in May.

The city is still investigating the incident to determine what caused the explosion. An official who was briefed on the investigation told the AP that some people involved with the building were not cooperating with investigators.

On Sunday, two bodies were recovered at the site of the explosion. One victim was identified as 23 year-old Nicholas Figueroa, a bowling alley worker who was on a date at the sushi restaurant when the explosion occurred.

The city is still working on DNA identification of the other victim, which the city said it will complete by Wednesday.

Authorities have been searching for 26 year-old Moises Lucon, who worked at the sushi restaurant and went missing after the explosion.