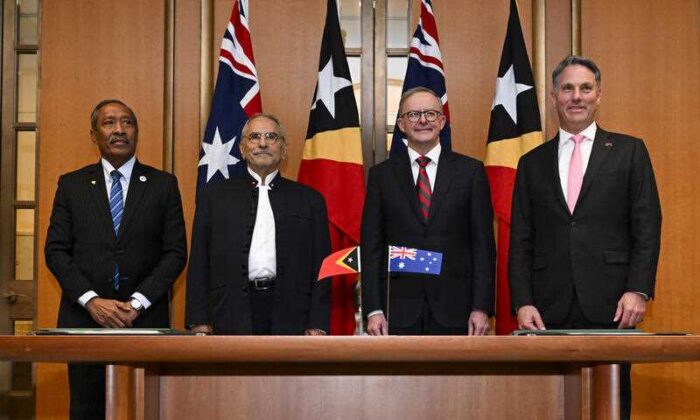 East Timor Will Not Support a Chinese Military Base, President Says

East Timorese President Jose Ramos-Horta has said that he would not allow a hostile or potentially hostile country to set up a military base in East Timor, having affirmed that his country’s “close ties” with Beijing pose no security threat to Australia.

This follows the signing of a Defence Cooperation Agreement (DCA) between the country’s defence ministers on Sept. 7 that will see Australia and East Timor increase defence and security cooperation, especially maritime. The agreement also aims at increasing the cooperation of the countries’ armed forces on exercises, training, humanitarian assistance and disaster relief.

“We have a responsibility to our neighbours, to Australia, to Indonesia, to other southeast Asian countries not to allow Timor-Leste (East Timor) to be a base for any hostile power or power that is perceived by our neighbours to be potentially hostile,” Ramos-Horta told the Australian Broadcasting Corporation (ABC).

Speaking on the agreement, Australian Prime Minister Anthony Albanese said that the two countries “share a special relationship as neighbours” with a shared history and deep ties.

“We have been working towards a DCA for over a decade and today’s signing is a significant step forward in our partnership,” Albanese said in a statement.

Ramos-Horta arrived in Australia as an official guest on Sept. 6 for a five-day visit for talks with political and community leaders as his country seeks to develop its economy and play a role in regional stability.

Beijing’s growing influence in the pacific has been concerning for Australia, given a recent security deal made between the Solomon Islands and the communist regime.

Previously in August, Ramos-Horta told The Guardian that his country would “consider a partnership with Chinese investors” if the Australian government refused to have a gas pipeline constructed from the Timor Sea to the country’s southern coast.

This prompted a visit to Dili on Sept. 1 by Australian Foreign Minister Penny Wong, who called on her counterparts to engage in quiet diplomacy.

The resource-heavy Timor Sea and the associated gas pipeline have been an ongoing point of contention between the two countries since 2004.

“We all have an interest in a stable, prosperous order where sovereignty is respected, and where disputes are resolved by norms,” Wong said.

Ramos-Horta told the ABC that developing the Greater Sunrise fields, which are located 450 kilometres northwest of Darwin and 150 kilometres south of Timor-Leste, was like any other business investment.

“It is just a pipeline, and the Chinese would be an investor like Australia would be, like South Korea would be, and it wouldn’t be entirely a Chinese option. We have Indonesia. Indonesia is a serious potential partner in the development of Greater Sunrise,” he said.

“Australia is a strategic partner of Timor-Leste, but having close ties with China, particularly in enabling the development of Greater Sunrise, is not a security threat to Australia, is not Chinese maritime naval base in Timor-Leste.”

He added that East Timor is one of the few countries in the world that has “no loan” from Beijing.

“We don’t have a single cent of debt to China, but we do have an excellent relationship with China.

“Many Chinese business in Timor-Leste, particularly trade, and that has been tremendously helpful to our economy because construction material, building material and consumer items—clothing, shoes, bicycles—all become so much cheaper and affordable to our people.”

On June 3, East Timor signed series of agreements with Beijing in the areas of the economy, capacity building, infrastructure, agriculture, health, and the media.

While East Timor controls 57 percent of the field and is entitled to at least 70 percent of the royalties—with Australian energy company Woodside controlling 33 percent, and Japan’s Osaka Gas 10 percent—Ramos-Horta said his country would run out of money in a decade if the project did not proceed.

“It could be catastrophic,” he told the ABC. “We’d need to have Greater Sunrise operational commercially, maximum within the next seven, eight years. So we have to make a decision by the end of this year.”

Woodside’s preferred option is the already established hub in Darwin, but East Timor wants the gas piped to a new site on its southern coast.

“We have a neighbour, Australia, that can make this miracle happen,” Ramos-Horta told the National Press Club in Canberra on Sept. 7.

“This way, it contributes to a very dynamic Timor-Leste economy … you will see Timor-Leste as another Dubai or another Singapore.”

“Other than that, please don’t lecture me,” he told the SBS reporter on Sept. 7.

Victoria Kelly-Clark and AAP contributed to this report.