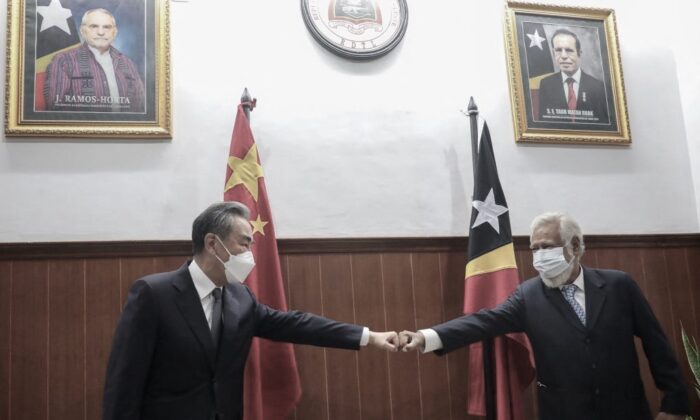 East Timor President Ramos-Horta has ruled out a security pact with China’s ruling communist regime but defended his country’s decision to sign a slew of deals across areas including agriculture and economic cooperation.

China’s Foreign Minister Wang Yi and his East Timor counterpart Adaljiza Magno on Friday approved a series of agreements in East Timor’s capital of Dili as Wang’s final stop on a 10-day tour of the South Pacific.

Under the agreements, the two countries will cooperate in the areas of economy, capacity building, infrastructure, agriculture, health, and the media. The Chinese regime will also dispatch a Chinese medical team to Timor-Leste and provide the Pacific nation with 17 scholarships for students to study in China.

“The leaders expressed that Timor-Leste and China are partners to advance international peace, stability and prosperity,” the press release said. Wang “reiterated China’s support to Timor-Leste’s ongoing application to join ASEAN and WTO. As well, both ministers were determined to strengthen the two countries’ collaboration in various regional and multilateral fora including the United Nations.”

Meanwhile, according to a press release from the East Timor government, Wang will provide “a small financial contribution” to the Ministry of Foreign Affairs and Cooperation of Timor-Leste. It did not specify how much and for what the money would be used.

However, asked whether East Timor is interested in signing a security deal with China, Ramos-Horta responded “Absolutely not, why would we?”

The president noted that East Timor’s “immediate interests” and “strategic interests” are within their immediate regions.

“We don’t feel threatened by anyone, we have the best possible relationship with the United States, with Indonesia, with Australia, and New Zealand and Singapore,” he told Sky News on Saturday.

Ramos-Horta added that the agreements two signed with Beijing are part of their ongoing relationships for the past 20 years and have “nothing to do with land security, air, or maritime security.”

He assured that Australia remains East Timor’s “number one partner” in defence and security in economics, but described U.S. allies’ concerns about the Chinese Communist Party’s (CCP) “security motives” as a “storm in a teacup.”

“I fully sympathise with Australia and the United States fears, that China might have other motives, for its current visibility, active presence in the Pacific islands.

The move comes after leaders of 10 Pacific nations rejected a wide-ranging security and trade pact with the CCP, in which the communist party would provide Pacific nations with “high level police training” and forensic laboratory processing for police forces, in addition to cyber security, customs, and data network support.

The deal has raised concerns among Australian and U.S leaders, who viewed it as part of the CCP’s effort to ramp up its influence in the Pacific.

Australia’s new Prime Minister Anthony Albanese, who flies to Indonesia on Sunday with Foreign Minister Penny Wong, recognised there is “strategic competition in the region and that requires Australia to step up.”