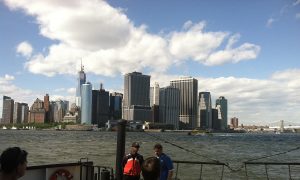 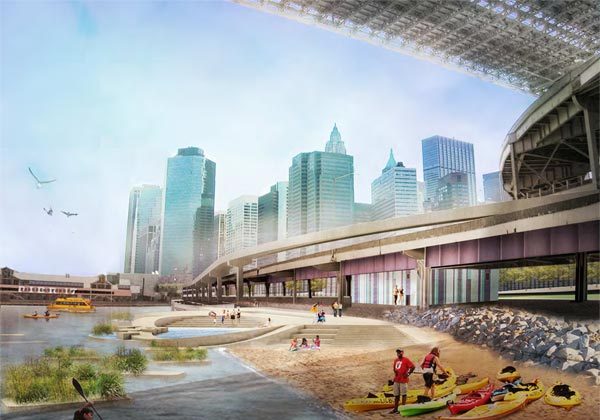 NEW YORK—The East River’s long, yearned-for evolution into a destination for exercise, rest, and play is moving forward piece by piece, although a fully unified waterfront is still well in the future.

For the past two years, Manhattan Borough President Scott Stringer has been working to pull together scattered plans and concepts for waterfront access and use held by the community, as well as state, city, and private owners.

Stringer, through his East River Blueway Plan, has created one unified vision to make the river a more vibrant part of the city. A work in progress from the beginning, it was launched in November 2011 and finalized in May 2013.

“We needed a unified plan for the waterfront,” said Lin Zeng, deputy director of land use, planning, and development at Stringer’s office. “We tasked a consultant with looking at what’s already out there.”

Zeng spoke during a public presentation of the plan at the Community Board 2 meeting in Lower Manhattan on July 8. In addition to asking for ongoing support, she described the plan’s six major objectives and showed artist renderings of what the East River could become.

The objectives include rooftop use, a boat launch, a flood barrier, a landscape bridge, wetlands, and a new beach. Parts of the plan were included in Bloomberg’s behemoth resiliency outline for the city’s recovery after Hurricane Sandy, but one fundamental point still needs to be resolved: land ownership.

The water is controlled by the state, and the land falls under the jurisdiction of city, state, and private owners.
“It’s a mix [of land ownership] and that is one of the biggest challenges,” said Zeng.

Encompassing the Brooklyn Bridge across the East River to 38th Street, the plan is not a typical government call to action—rather, it is meant to be a starting point for discussion. Stringer, whose office has already committed $3.5 million to the project according to Zeng, is willing to revise the plan based on what the community wants.

His office is already making good on its promise to incorporate public feedback and engagement. The July 8 Community Board meeting wasn’t a one-off; in the past couple of months he and his staff have sought out influential community members for their buy-in, support, and ideas. A presentation of the final plan in May at Cooper Union was met with enthusiasm and optimism.

Despite the generally positive responses, there are financial and logistical challenges.

“A lot of the composition of the plan would require significant financial investment,” said Diana Switaj, director of land use and planning for Community Board 1.

Switaj added that the board has bought into the idea of the Brooklyn Bridge Beach, which would give public access to a natural beach under the bridge and create a terraced seating area with a view.

“The community thought that it was one of the most financially feasible parts of the plan,” said Switaj.

The financial considerations in many other areas are still up in the air, and Stringer’s office will only say it is in conversation with the Economic Development Corporation to “put things into place.”

Though the East River Blueway was initially launched a full year before Sandy, the storm brought additional considerations to light.

A key question has become how to help buffer the Con Edison East River complex that spans a city block between East 13th Street and East 14th Street.

During Sandy, flooding at that Con Edison complex caused a massive power outage over 11 electric networks and left much of Lower Manhattan in the dark for days.

According to Zeng, the Blueway Plan would add a pedestrian crossing and flood barriers at 14th Street at the Con Edison complex, which she said is a “pinch point.”

“The barrier there is that the Con Edison station cannot be moved,” Zeng said. The solution that the plan’s concept designer, WXY Architecture + Urban Design, came up with is an x-shaped bridge at 14th Street that would double as a storm barrier. The pedestrian bridge would cross FDR Drive to link the parks and neighborhoods north and south of the Con Edison facility.

“This multi-use approach highlights how storm surge protection can also facilitate social needs by greatly improving pedestrian access and flow at what is now the narrowest pedestrian path or ‘pinch point’ in the study area,” states the plan.

Con Edison has been making its own efforts, with about $1 billion proposed in changes and improvements over the next four years.

Although Stringer has been passionately involved in moving his vision forward, his hope of taking up the position of city comptroller in the fall elections could limit his future involvement. Until then, his office is trying to create enough momentum through public engagement to keep the plan alive.